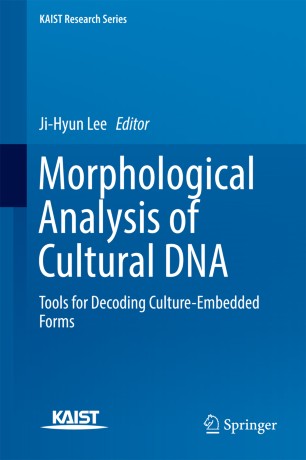 This volume describes research in computational design which implements shape grammars or space syntax for morphological analysis, applying these scientific and rule-based methodologies to cultural aspects of the field. The term ‘cultural DNA’ describes the effort to explore computational design from the perspectives of a meme, a socio-cultural analogy to genes. Based on the 1st Cultural DNA Workshop, held at KAIST, Daejeon, Korea in 2015, the book considers whether there is such a thing as a ‘cultural DNA’ common throughout various domains, and if so how computer-assisted tools and methodologies play a role in its investigation.

Following an introduction covering some fundamental theories of cultural DNA research, part two of the book describes morphological analysis in architecture, with examples from Malaysia and China. Part three then moves up to morphological analysis at the urban scale, including discussion of morphological evolution in France, development of a model Korean city, and introducing a rule-based generative analysis approach for urban planning. Part four considers methods for analysing the DNA of other cultural artefacts such as online games, novels, cars, and music, and part five introduces the tools under development that aid morphological cultural DNA research including topics about shape grammar, building information modeling (BIM), cultural persona, and prototyping.

The book will be of significant interest to those involved in the cultural aspects of urban and architectural design, cultural informatics and design research.

Ji-Hyun Lee is an Associate Professor at the Graduate School of Culture Technology (GSCT) in Korea Advanced Institute of Science Technology (KAIST). She received her Ph.D. in School of Architecture (Computational Design) at Carnegie Mellon University writing a thesis about integrating housing design and case-based reasoning. Since joining the GSCT at KAIST, her research focus narrowed down to three interdisciplinary areas that are not mutually exclusive: (1) calculation for UX + service design, (2) cultural DNA with morphological analysis, and (3) computational creativity. These explorations result in computer-based frameworks or systems contributing to the enhancement of the calculability using algorithmic and/or heuristic computational methods. In other words, her research focus is on ‘computational culture’ as an extension of computational design.

She served for the Secretary of Computer-Aided Architectural Design Research in Asia (CAADRIA) from 2008 to 2010. Currently, she is the Director of the Information-Based Design (IBD) Research Group, Descartes Lab in KAIST and also serving as the Editorial Board Member for Architecture Research and International Journal of Innovations in Information Technology. She also serves as a Director of Korean Society of Service Design and Innovation (KSSDI), Korean Society of Design Science (KSDS) and HCI Korea. She is a member of Architectural Institute of Korea (AIK), Korea Intelligent Information System Society (KIISS), Society of CAD/ CAM Engineers and SIG-Design Creativity of the Design Society.