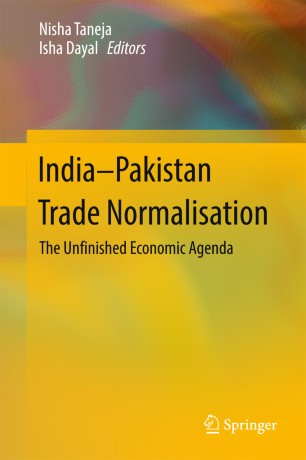 This book explores the unfinished India–Pakistan Trade normalisation agenda (building upon the themes covered in the book “India-Pakistan Trade: Strengthening Economic Relations” published by Springer in 2014) and discusses the steps that must be undertaken in order to move the bilateral engagement forward. Given the commencement of bilateral state-level talks and the Indian government’s emphasis on South Asian integration, it adds impetus to the trade liberalisation process, while also providing essential recommendations for policymakers in both countries.

The unfinished agenda faces obstacles such as the list of items for which export from India to Pakistan continues to be restricted; lack of land borders and seamless cross-border transport services, which hampers the realisation of trade potential; negative reporting in the media, which influences traders’ perceptions; and the continued occurrence of informal trade resulting from inadequacies of formal trade relations. The book examines various sectors, including the agricultural, textiles, automotive and pharmaceutical industries, given their predominance on the list of restricted items for bilateral trade. It also covers studies on unconventional and under-researched themes concerning informal trade, informational barriers to India–Pakistan trade, and opening new land borders for trade – all of which can play a facilitating role in realizing the untapped trade potential between India and Pakistan. The book also includes the second round of the India–Pakistan trade perception survey, which identifies impediments to India–Pakistan bilateral trade and assesses the change in traders’ perceptions since the first round of the survey, which was published in 2014.

Nisha Taneja is a Professor at the Indian Council for Research on International Economic Relations (ICRIER), New Delhi, India. She has a PhD from the Jawaharlal Nehru University, New Delhi, and has a wide range of experience in policy-oriented research in India. Her key areas of interest include trade and transport facilitation, non-tariff barriers, regional integration, informal trade, institutional economics and the textile industry. She has worked on various aspects of India–Pakistan trade, India-Nepal trade, India–Sri Lanka trade, India-China trade, India-Japan trade, India-Korea trade, India-Bangladesh trade and India-Myanmar trade on issues related to tariffs, sensitive lists, services, investment, non-tariff measures, and trade and transport facilitation.

Dr. Taneja‘s research work has been a key contributor to the trade negotiations in the South Asian region. She has served on committees set up by the Government of India on Informal Trade, Rules of Origin and Non-tariff Barriers. She has been a consultant to the World Bank and the Asian Development Bank. Dr. Taneja has also conducted research for several government ministries, bilateral and multilateral agencies.

Dr. Taneja has published 3 books, more than 50 articles in books and journals and 35 reports/working papers. She is the co-editor of the book India-Pakistan Trade: Strengthening Economic Relations, published by Springer in August 2014. Her work has been disseminated widely in India and several other countries including Bangladesh, Nepal, Sri Lanka, Pakistan, Philippines, Thailand, Korea, Japan, USA, UAE and Germany.