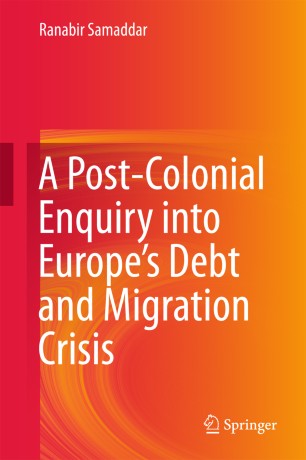 A Post-Colonial Enquiry into Europe’s Debt and Migration Crisis

This important and topical volume is composed around the debt and migration crisis in Europe in 2015 (known as the Greece crisis), and written almost concurrently as the two crises developed in quick succession. The central argument here is that Europe’s present crisis suggests a post-colonial bind, or to put in stronger terms, a post-colonial destiny of Europe. The European situation bears remarkable similarity with the post-colonial condition elsewhere in the world and suggests a strong bond between Europe’s present situation and the post-colonial bind in which much of the world finds itself. The purpose of this volume is to examine in the light of 21st century capitalism notions such as debt, crisis, rupture, dialogue, mobilization, neo-liberalism, war and migration, and the old, never to be settled, question of ideology. The volume ends with reflections on Europe’s migration crisis, and reinforces the point that a critical post-colonial sense of history, accumulation, globalization, and the resilience of the nation form will help us reflect on the present European crisis, and draw appropriate lessons.

Ranabir Samaddar has worked extensively on issues of migration and forced migration, nationalism and post-colonial statehood in South Asia, and new regimes of technological restructuring, labour control, and forms of labour. His recent writings on postcolonial capitalism and India’s neoliberal development have signalled a new turn in critical postcolonial thinking. His co-authored work on new towns and new forms of accumulation Beyond Kolkata: Rajarhat and the Dystopia of Urban Imagination (2013) takes forward urban studies in the context of post-colonial accumulation. He is currently Distinguished Chair in Migration and Forced Migration Studies, Calcutta Research Group, Kolkata.