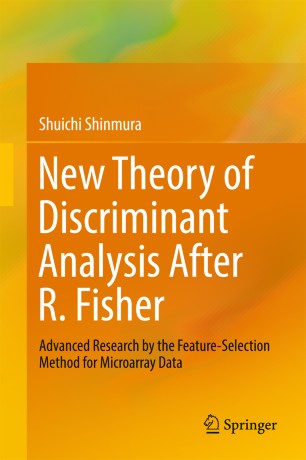 Advanced Research by the Feature Selection Method for Microarray Data

This is the first book to compare eight LDFs by different types of datasets, such as Fisher’s iris data, medical data with collinearities, Swiss banknote data that is a linearly separable data (LSD), student pass/fail determination using student attributes, 18 pass/fail determinations using exam scores, Japanese automobile data, and six microarray datasets (the datasets) that are LSD. We developed the 100-fold cross-validation for the small sample method (Method 1) instead of the LOO method. We proposed a simple model selection procedure to choose the best model having minimum M2 and Revised IP-OLDF based on MNM criterion was found to be better than other M2s in the above datasets.
We compared two statistical LDFs and six MP-based LDFs. Those were Fisher’s LDF, logistic regression, three SVMs, Revised IP-OLDF, and another two OLDFs. Only a hard-margin SVM (H-SVM) and Revised IP-OLDF could discriminate LSD theoretically (Problem 2). We solved the defect of the generalized inverse matrices (Problem 3).
For more than 10 years, many researchers have struggled to analyze the microarray dataset that is LSD (Problem 5). If we call the linearly separable model "Matroska," the dataset consists of numerous smaller Matroskas in it. We develop the Matroska feature selection method (Method 2). It finds the surprising structure of the dataset that is the disjoint union of several small Matroskas. Our theory and methods reveal new facts of gene analysis.