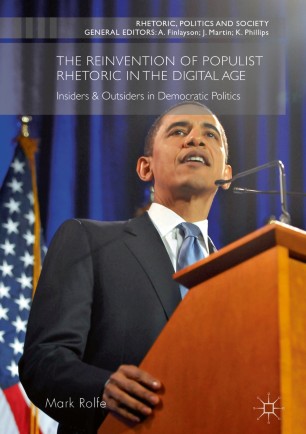 The Reinvention of Populist Rhetoric in The Digital Age

This highly original work considers the rhetoric of political actors and commentators who identify digital media as the means to a new era of politics and democracy. Placing this rhetoric in an historical and intellectual context, it provides a compelling explanation of the reinvention and thematic recurrence of democratic discourse. The author investigates the populist sources of rhetoric used by digital politics enthusiasts as outsiders inaugurating new eras of democracy with digital media, such as Barack Obama and Julian Assange, and explores the generations of rhetorical and political history behind them. The book places their rhetoric in the context of the permanent tensions between insiders and outsiders, between the political class and the populace, which are inherent to representative democracy. Through a theoretical and conceptual research that is historically grounded and comparative, it offers rhetorical analysis of candidates for the 2016 presidential election and discusses digital democracy, particularly discussing their origins in American populism and their influence on other countries through Americanization. Uniquely, it offers a sceptical assessment of epochal claims and a historical-rhetorical account of two of the defining figures of twentieth-century politics to date, and reveals how modern rhetoric is grounded in an older form of anti-politics and reveals that, despite their iconoclastic images and mobilises tropes that are as old as representative democracy itself.

Mark Rolfe is Lecturer at the School of Social Sciences, University of New South Wales, Australia. He specialises in the fields of rhetoric, propaganda, political satire, Americanization, political leadership, and Australian politics.