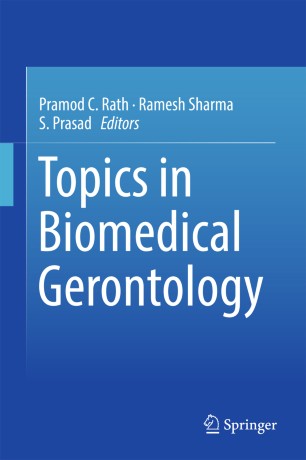 This book presents a collection of articles on various aspects of current research on aging. These include model systems, cellular, biochemical and molecular aspects of experimental aging research, as well as selected intervention studies on age-related diseases.

Aging is a global challenge to human society. Children are always in a hurry to become adults, while adults produce offspring and add to the gene pool. However, after adulthood or the attainment of reproductive maturity, all physiological parameters of the living organism start to undergo the aging process. Old age sets in slowly but surely, and usually continues for a prolonged period. If vigor and vitality are the main advantages of adulthood, old age offers the rewards of experience and maturity.

Biologists ask questions such as: Why do we age? How do we become old? Is it possible to slow down, postpone or even prevent aging? In turn, medical experts ask: What are the diseases associated with old age? Are there medicines that can help affected elderly patients? In fact both groups are asking themselves how can we add more health to old age.

Healthy aging is the dream of every individual. But to achieve this, it is fundamental that we first understand the cellular, biochemical and molecular basis of the aging process in mammalian cells, tissues and intact living organisms, which can serve as experimental model systems in Biomedical Gerontology. Once the biology of aging is understood at the genetic and molecular levels, interventional approaches to aging and its associated diseases may be easier to plan and implement at the preclinical level.

Pramod C. Rath is a Professor of Molecular Biology and has been Acting Dean of the School of Life Sciences, Jawaharlal Nehru University, New Delhi. He received his Ph. D. in 1988 from the Biochemistry Section of the Zoology Department, Banaras Hindu University, Varanasi, India on “Expression and Modulation of Genes during Aging of the Rat” under the supervision of Prof. M. S. Kanungo. He did his post-doctoral research at the Institute for Molecular Biology I, University of Zurich, ETH-Hoenggerberg from 1989 to 1990 on “Regulation of Interferon Gene Expression in Mammalian Cells” with Prof. Charles Weissmann, Director. He joined the School of Life Sciences, Jawaharlal Nehru University, New Delhi as an Assistant Professor (Molecular Biology) in December 1990. He went to Cold Spring Harbor Laboratory, New York, as a Short-term Scholar in March, 1998 to work on “Advanced Genome Sequencing and Analysis” with Prof. Richard MacCombie, Chief, Genome Sequencing Research Group. He was a Visiting Research Scientist during 1998-99 at the University of Texas M. D. Anderson Cancer Center, Houston, Texas and worked on “Cytokine Signalling and Cancer” with Prof. Bharat B. Aggarwal, Chief, Cytokine Research Laboratory. He also went to the Stem Cell Institute, Medical School, University of Minnesota, Minneapolis as a Short-term Scholar during Nov.-Dec., 2005 and worked on “Multipotent Adult Progenitor Cells (MAPCs)” with Prof. Catherine Verfaillie, Director. He has 25 years of teaching and research experience, having mentored 17 Ph. D. and 3 M. Phil. students. He teaches Molecular Biology, Molecular Genetics and Cell Signalling courses at M. Sc. and Pre-Ph. D. levels. His research areas include (i) Genomic Biology of Repetitive DNA and Noncoding RNA; (ii) Cytokines, Transcription Factors, Cell Signalling and Disease and (iii) Mesenchymal Stem Cells from Bone Marrow and Regenerative Medicine. He has many research publications to his credit in reputed international journals, such as, Ageing Research Reviews, Molecular Neurobiology, Journal of Molecular Neuroscience, International Journal of Developmental Neuroscience, International Journal of Biological Macromolecules, RNA Biology, PLos One, Journal of Clinical Immunology, Journal of Interferon and Cytokine Research, Biochim. Biophys. Acta (Molecular Biology of Disease), Biochem. Biophys. Res. Commun., FEBS Letts., Mol. Biol. Rep. etc. He has also contributed chapters to books including “Gene and its Engineering”, “Textbook of Biotechnology”, “Textbook of Geriatric Medicine”, “Quality Aging”. He has been the recipient of several awards including the A. B. Mishra award for being the gold-medalist during his M. Sc.; the Council of Scientific and Industrial Research fellowship for completing his Ph. D.; Swiss National Fund post-doctoral fellowship; Young Scientist research project of the Department of Science and Technology, Government of India, 1993-95; Advanced Genome Sequencing and Analysis course fellowship, Cold Spring Harbor Laboratory, New York, 1998; Clayton Research Foundation Visiting Scientist fellowship, University of Texas M. D. Anderson Cancer Center, Houston, 1998-99 etc. He is a life member of many scientific bodies, including Vice-President of the Association of Gerontology, India (AGI), Indian Immunology Society (IIS), Indian Society of Cell Biology (ISCB), Association of Biotechnologists of India (ABI), Indian Association for Cancer Research (IACR), Society of Biological Chemists (India), and the Society for Translational Cancer Research (STCR). He has been a part of many scientific meetings, conferences and committees. He is a reviewer for many reputed journals, such as Cancer Investigations, DNA and Cell Biology, Indian Journal of Biochemistry and Biophysics, J Genetics, Scientific Reports (NPG), FEBS Letts, BMC Cancer (Biomed Central), Molecular Neurobiology, Neuroscience Letts, Molecular Biology Reports, e-CAM, Biomed. Res. Int., J. Cell. Biochem., Biogerontology etc. He is an Editorial Board member for Frontiers in Cell and Developmental Biology, Switzerland.

Ramesh Sharma (Ph. D., Banaras Hindu University, 1981) is a Professor at the Department of Biochemistry, North-Eastern Hill University, Shillong, India. He did his post-doctoral research at the University of California, Berkeley, USA (1986-88), and was a Visiting Professor at the Institute of Enzyme Research at Tokushima University, Japan (1989-90) and at the Department of Biochemistry at the School of Pharmaceutical Sciences, Toho University, Chiba, Japan (2003-04).  He has been teaching various disciplines of physiology and biochemistry for the past 33 years, mostly at the post-graduate/research level. He has been on the editorial board of international journals such as ‘Biogerontology’ from Springer, the Netherlands; ‘International Journal of Developmental Neurosciences’ from Elsevier, USA; ‘Okinawa Wellness & Longevity Journal’ Okinawa, Japan; and ‘Frontiers in Genetics of Aging’, Science Park, Switzerland.  He has produced more than 80 publications in international and national journals of repute in the field of aging research and has produced 16 Ph. D.s. In 2008, he was elected as a Fellow of the National Academy of Sciences (India). He has been the Head of the Department of Biochemistry for three terms (1993-96; 1999-2002; 2011-14) and is presently Coordinator of the UGC-SAP programme in Biochemistry and the Dean, School of Life Sciences. He has also been Coordinator of the University with Potential for Excellence (UPE) given by UGC to NEHU. He has been a member of the board of management of NERIST and a research council member of CSIR-RRL (now NEIST), Jorhat, Assam. Prof. Sharma has also been Chairman of the Board for under- and post-graduate studies in Biochemistry, Home Science and Nursing and a member of the Academic Council of NEHU and Mizoram University. He has been the President of Association of Gerontology (India) and is a member of the Task Force on Neuro-Disease Biology, DBT, GOI (2014-17). Prof. Sharma visited Semmelweis University, Budapest, Hungary (2014) under INSA-Senior Scientist Exchange Fellowship and was a Visiting Researcher at Toho University, Chiba, Japan (Jan. 01-March 31, 2016).

S. Prasad did his B. Sc. (1978, Bot., Zool., Chem.); M. Sc. (1980, Zoology with Biochemistry Specialization); Ph. D. (1988, Zoology) from the Banaras Hindu University (B.H.U.), Varanasi, India and joined as a Lecturer in 1991 and is serving at present as a Professor at the Department of Zoology, Institute of Science, B.H.U. since 2008. He worked on “Age-associated Studies on HMG Non-Histone Proteins of the Rat Liver” for his doctoral degree under the mentorship of Prof. M. K. Thakur, F.N.A.Sc., F.I.A.N. His current research interests are focused on molecular, behavioral and neurobiological mechanisms of aging as well as learning and memory during aging and diseases. He visited Royal Cancer Centre Research Institute, Tokyo under AMBO International Fellowship to work on “Genomics of Cancer” in 1991 and availed MRC Visiting Fellowship to work on “Estrogen-induced Expression of Genes in Aging Brain” with Prof. J. A. Edwardson at MRC Neurochemical Pathology Unit, New Castle General Hospital, New Castle upon Tyne, U.K. duing 1995-96. He is associated with teaching of Biochemistry & Molecular Biology, Physiology, Neuroscience, Molecular Techniques at undergraduate, postgraduate and doctoral levels in the Department of Zoology since last 26 years and Biochemistry and Neurobiology at the Department of Molecular Human Genetics until 2011. He has produced three Ph. D. students and four to submit their Ph. D. theses. He has guided and trained several postgraduate students from BHU and other universities for their dissertation work. He has been on several academic and administrative committees of the Institute of Sciences and University. He has served as member on Board of Studies for Biotechnology and Bioinformatics and Zoology at the North Eastern Hill University, Shillong, Molecular Human Genetics, Biophysics, Forensic Science and Interdisciplinary School of Life Sciences at BHU. He has published 34 research publications in journals of high impact on Aging, Molecular Biology and Neuroscience. He has written book chapters and review articles. He has edited a book on “Cellular and Molecular Neurobiology” (Narosa Publishing House, New Delhi). He is in the reviewers’ panel of many journals, e.g., Biogerontology (Springer), Neurochemistry International (Elsevier), World Journal of diabetes and ECAM (Hindawi). He has been elected as a member of the National Academy Sciences (India), Allahabad in 2010 and is associated with Association of Gerontology (India), Society of Biological Chemists, Indian society of Cell Biology, Indian Academy of Neurosciences and Society of Neurochemistry (India) as a life member and currently serving as the Secretary of Association of Gerontology (India).