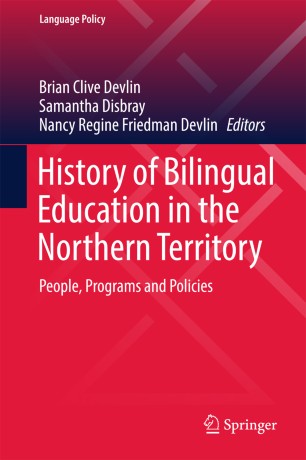 History of Bilingual Education in the Northern Territory

This book provides the first detailed history of the Bilingual Education Program in the Northern Territory of Australia. This ambitious and innovative program began in 1973 and at different times it operated in English and 19 Aboriginal languages in 29 very remote schools. The book draws together the grassroots perspectives of Indigenous and non-Indigenous practitioners and researchers.  Each chapter is based on rich practitioner experience, capturing bottom-up aspirations, achievements and reflections on this innovative, yet largely undocumented language and education program. The volume also makes use of a significant collection of ‘grey literature’ documents to trace the history of the program.  An ethnographic approach has been used to integrate practitioner accounts into the contexts of broader social and political forces, education policy decisions and on-the-ground actions. Language in education policy is viewed at multiple, intersecting levels: from the interactions of individuals, communities of practice and bureaucracy, to national and global forces. The book offers valuable insights as it examines in detail the policy settings that helped and hindered bilingual education in the context of minority language rights in Australia and elsewhere.

Brian Devlin is an honorary professorial fellow at Charles Darwin University, Darwin, Northern Territory, Australia. His research interests include the use of vernacular languages in educational programs, interactive e-learning for isolated communities and bilingual education policy in Australia’s Northern Territory. He was a Visiting Professor and first holder of the Dr R Marika Chair in Australian and Indigenous Studies at Cologne University, Germany (October 2009-February 2010) and also Visiting Foreign Expert at Tsingua University in China.  For the last few years he has been a chief investigator in the Living Archive project, helping to create a digital archive of the texts produced in Literature Production Centres during the bilingual era of education in the Northern Territory.

Samantha Disbray is a Research Fellow at Charles Darwin University and the Australian National University, researching language in education and carrying out language documentation in the Northern Territory. She has worked as a community and research linguist in Central Australia and has carried out language documentation and resource development work with speakers of traditional and contemporary Aboriginal languages. While employed as regional linguist for the Northern Territory Department of Education, she supported schools with bilingual and Indigenous language and culture programs. From this experience she became fascinated with the history of the bilingual program, and its place in the history of education and languages policy in Australia.

Nancy Devlin is a lecturer at Charles Darwin University in the School of Education.  She works primarily with students in the professional teaching degree programs.  Her areas of interest are focused on providing an education for students that will enable them to have choices and feel good about themselves. She joined Charles Darwin in 2002 to help establish certification for students interested in education support due to her long association working with teaching assistants in bilingual and special education programs at government and non-government schools in Australia and the United States. She has also taught in China, Germany, and Papua New Guinea.