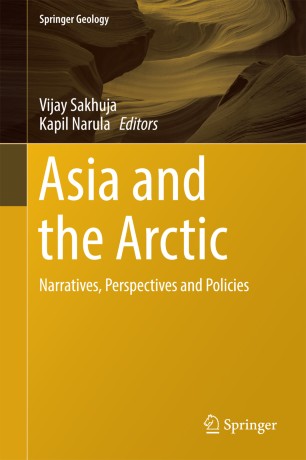 Asia and the Arctic

This book presents narratives, perspectives and policies on the Arctic and brings to fore the strategies of five Asian countries - China, India, Japan, Republic of Korea and Singapore who were granted the status of Permanent Observers in the Arctic Council in 2013.  The book also captures Arctic countries’ reactions to Asian approaches, and their expectations from these countries.

The melting of the polar sea-ice induced by climate change has placed the Arctic region in the forefront of global scientific, economic, strategic and academic interest. The discourse involves a number of issues such as claims of the littoral countries to the continental shelves of the region, the management and exploitation of its living and non-living resources, the rights and interests of indigenous communities, and the prospects of new ice-free shipping routes. The contemporary discourse also suggests that the Arctic region presents challenges and offers opportunities for the international community.

These issues have given rise to new geopolitical, geoeconomic, and geostrategic dynamics amongst the Arctic littorals, and led to the growing interest of non-Arctic states in the affairs of the Arctic. It is evident that the Asian countries have a variety of interests in the Arctic, and the grant of Permanent Observer status to these countries is an acknowledgement of their capabilities. These countries are keen to explore opportunities in the Arctic, and have begun to formulate appropriate long-term national strategies. The preliminary approach of the Asian Observer countries has rightly been to graduate from ‘involvement’ to ‘engagement’ in the Arctic, which seems to have generated significant interest amongst analysts. This book helps to understand the approaches of various Arctic and non-Arctic stakeholders, in light of the evolving dynamics in the region.