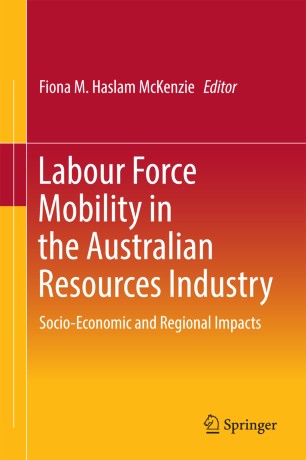 This book addresses the socio-economic impacts of rapid economic development due to a global mining boom. It reviews the efforts taken by communities, governments and companies in Australia to deliver enduring benefits while minimising the negative consequences of rapid growth. In particular, the effects and tensions of new workforce arrangements, worker mobility and condensed mine life cycles on communities and economies are explored. Split into two parts, the first part of the book details various issues related to the socio-economic impacts of Labour Force Mobility and Rapid Economic Growth, while the second part focuses on measuring the socio-economic impacts of Rapid Economic Growth. Chapter contributors have technical and scientific backgrounds which have been informed by social perspectives. They understand the technical and economic spheres of the resources industries and recognize the gaps in the public policy which hinder regional economic development during a period of extraordinary growth and opportunity. The book is a useful resource for practitioners in the public policy, resources, community planning and economic development sectors as well as students in business, regional planning and human resources.

Professor Fiona Haslam McKenzie was educated in Western Australia and the United States and has a varied academic background including a PhD in political geography, researching the socio-economic impacts of the restructuring of the Australian agricultural industry. Fiona has extensive experience in population and socio-economic change, housing, regional economic development and analysis of remote, regional and urban socio-economic indicators. She has published widely and undertaken work for the corporate and small business sectors both nationally and in Western Australia as well conducting work for all three tiers of government.

Fiona has served on several government and private sector boards. She was appointed by the Federal Minister for Regional Development, Local Government, Sports and the Arts to the Regional Development Australia Fund in 2011. She was the State Director of the Housing and Urban Research Institute of Western Australia 2005-2010 and advised the State government on restructuring the local government sector. She has undertaken numerous projects for the private and public sector and has been awarded Australian Research Council, Rural Industries and Research and Development Corporation and Commonwealth of Australia Knowledge research grants.

She led the CSIRO Minerals Down Under Regions in Transition Project until 2012. This research program investigated communities in four regions across two Australian states which have traditionally been dominated by agricultural, broadacre businesses but which have experienced land use and labour force change with increased mining activity. In 2010, she was appointed the Chief Investigator, leading the Regional Economies – Enduring Community Value from Mining division of the Remote Economic Participation Co-operative Research Centre and since 2015 she has been the co-director of the Centre for Regional Development at the University of Western Australia. Fiona has conducted research in regional and remote communities assessing the barriers and opportunities for long term benefits derived from the resource industries.

Fiona is currently investigating the socio-economic impact of different workforce arrangements for the mining industry, including long distance commuting, residential and automated mine sites. She is also supervising and actively engaged in research projects, across rural, regional and remote areas of Australia tracking and mapping mining company regional engagement strategies and assessing the impact of mining on small business, local communities and economies, and the potential for enduring community value from mining.

Fiona has a professorial appointment at the University of Western Australia with teaching and research responsibilities.