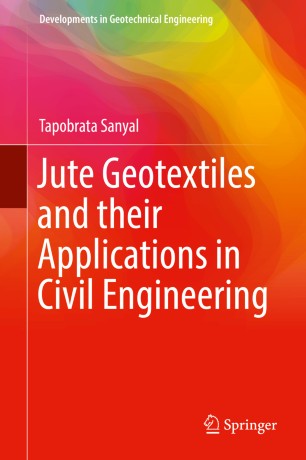 Jute Geotextiles and their Applications in Civil Engineering

Part of the Developments in Geotechnical Engineering book series (DGE)

This book presents a first-of-its-kind exposition on the emerging technology of jute fibre geotextiles. The book covers the characteristics of jute fibre and jute yarns, types and functions of jute geotextiles, and the mechanism of control of surficial soil with jute geotextiles. The content also includes applications such as the mechanisms of functioning of jute geotextiles in strengthening road sub-grade and controlling river bank erosion, stabilization of earthen embankments, management of settlement of railway tracks, and consolidation of soft soil by use of pre-fabricated vertical jute drains (PVJD). Geotextile standards, properties and test methods, variants of jute geotextiles, economical and environmental advantages in different applications are covered along with a few case studies. A chapter on soil basics is included to enable clearer understanding of soil mechanisms. The book can be used as a reference work or as primary or supporting text for graduate and professional coursework. It will also prove useful to researchers and practicing engineers looking for a comprehensive treatise on jute geotextiles.

Tapobrata Sanyal is an internationally known geotechnical and river expert, an acclaimed writer, a speaker and a social thinker. He graduated in civil engineering from Calcutta University (BE College, now IIEST) in 1961. He had his post-graduate stint in Holland as a government nominee in river engineering in the specialized field of geo-synthetic applications. At present he is the Chief Consultant to National Jute Board, Ministry of Textiles, Government of India. He is a fellow of the Institution of Engineers (India) and member of several academic bodies in India and abroad. He has contributed more than 60 technical and research papers in national and international journals and has received a number of awards for his contribution. He has been awarded Life Time Achievement Certification from the International Geosynthetics Society (IS) for his outstanding contribution in the field of geosynthetics. He is the pioneer and an acknowledged exponent in application of Jute Geotextiles in India. He is in the Advisory Board of the Department of Science & Technology, Government of West Bengal (Geo-informatics & Remote Sensing). He has also been named as one of the Leading Scientists/Leading Intellectuals by foreign Assessment Boards and figures in the lists of ‘Who’s Who in Asia’, ‘Leading Scientists of the World’, ‘Leading Intellectuals of the World’ ‘Leading Professionals of The World’.