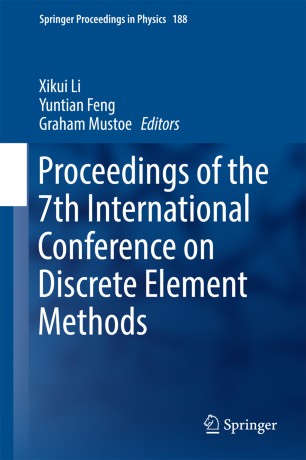 Proceedings of the 7th International Conference on Discrete Element Methods

This book presents the latest advances in Discrete Element Methods (DEM) and technology. It is the proceeding of 7th International Conference on DEM which was held at Dalian University of Technology on August 1 - 4, 2016. The subject of this book are the DEM and related computational techniques such as DDA, FEM/DEM, molecular dynamics, SPH, Meshless methods, etc., which are the main computational methods for modeling discontinua. In comparison to continua which have been already studied for a long time, the research of discontinua is relatively new, but increases dramatically in recent years and has already become an important field. This book will benefit researchers and scientists from the academic fields of physics, engineering and applied mathematics, as well as from industry and national laboratories who are interested in the DEM.

About the leading editor:

Li Xikui obtained his PhD at the University Wales of Swansea in 1989. He became Full Professor at DUT in 1992. He was an ARC (Australia Research Council) Int Fellow at University of Newcastle (2006). His main research interest is Computational Mechanics. He has published over 180 journal papers.

Prof. Li serves as a member on the Editorial Boards of Int. J. Numerical Methods Eng., Int. J. Damage Mechanics, Chinese Journal of Theoretical and Applied Mechanics and Chinese Journal of Computational Mechanics. He also served as vice-Chairman (1999-2003, 2007/11), Chairman (2003/07) of Academic Committee of Solid Mechanics of China. He was Director of Division of “Structures, Architectures and Environments”, Expert Panel Committee of the National Science Foundation of China (NSFC) (2000/01).