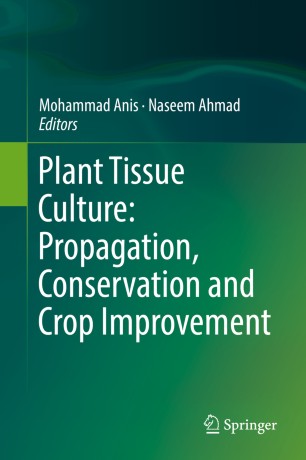 This book presents basic concepts, methodologies and applications of biotechnology for the conservation and propagation of aromatic, medicinal and other economic plants. It caters to the needs and challenges of researchers in plant biology, biotechnology, the medical sciences, pharmaceutical biotechnology and pharmacology areas by providing an accessible and cost-effective practical approach to micro-propagation and conservation strategies for plant species. It also includes illustrations describing a complete documentation of the results and research into particular plant species conducted by the authors over the past 5 years.
Plant Biotechnology has been a subject of academic interest for a considerable time. In recent years, it has also become a useful tool in agriculture and medicine, as well as a popular area of biological research. Current economic growth is globally projected in a highly positive manner, but the challenges many countries face with regard to food, feed, malnutrition, infectious diseases, the newly identified life-style diseases, and energy shortages, all of which are worsened by an ever-deteriorating environment, continue to pull the growth digits back. The common thread that connects all of the above challenges is biotechnology, which could provide many answers.
Molecular biology and biotechnology have now become an integral part of tissue culture research. The tremendous impact generated by genetic engineering and consequently of transgenics now allows us to manipulate plant genomes at will. There has indeed been a rapid development in this area with major successes in both developed and developing countries.
The book introduces several new and exciting areas to researchers who are unfamiliar with plant biotechnology and also serves as a review of ongoing research and future directions for scholars. The book highlights numerous methods for in vitro propagation and utilization of techniques in raising transgenics to help readers reproduce the experiments discussed.

Professor Mohammad Anis possesses about 31 years of teaching and research experience on Biotechnology and Cytogenetics. He has published over 185 research and review articles in Journals of International repute. He is recipient of National (1992) and Overseas (1994) Biotechnology Associateship of DBT, Govt. of India, INSA Visiting Scientist to Frankfurt University (1998) and Institute of Genetics and Plant Biotechnology, Nitra (2006), Slovak Republic, Eminent Scientist Award (2007) by National Environmental Science Academy, New Delhi, Vigyan Ratan Samman (2010) of Council of Science and Technology, U.P., Professor P. Maheshwari Medal (2013) and Mid-Career award of UGC (2015) for his significant contribution in Medicinal Plant Biotechnology. He has been Program Coordinator of several major projects like DST-FIST (I and II), UGC-DRS (I and II) and DBT-HRD.

Dr. Naseem Ahmad is Young Scientist SERB-DST, New Delhi in the Department of Botany, Aligarh Muslim University, Aligarh. He has more than 6 years of Postdoctoral experience in the area of Morphogenesis, Plant Tissue Culture and Molecular Biology. He has published about 37 research papers in Journals of International repute, 03 book chapter and 41 abstracts in various conferences. He is a member in the Editorial Board of various journals, holds Life Membership of many Learned/ scientific societies and is a Fellow of Indian Botanical Society (FBS). He is recipient of “National Scholarship” of Slovak Republic (2013), Yuva Vaigiyanik Samman (2009), CST, UP; Young Scientist (2010) by NESA, New Delhi, Rashtriya Gaurav Award (2015) by India International Friendship Society, New Delhi and Young Scientist of the year (2015) by International Foundation for Environment and Ecology (IFEE), Kolkata. He has received Post Graduate Merit Scholarship in M.Sc. and Best oral presentation awarded at BBAU (Central University) Lucknow and has availed Senior Research Fellowship (SRF) of CSIR, New Delhi.p>