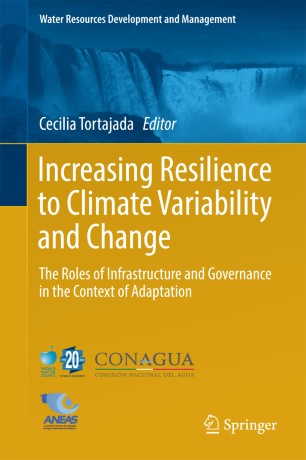 The Roles of Infrastructure and Governance in the Context of Adaptation

This book highlights the role that both infrastructure and governance play in the context of resilience and adaptation to climate variability and change. Eleven case studies analyze in-depth impacts of extreme events in projects, basins and regions in the Arid Americas (Unites States and Mexico), Australia, Brazil, China, Egypt, France, Nepal, Mexico, Pakistan, Turkey and South Africa. They discuss the importance of infrastructure (mainly reservoirs) in adaptation strategies, how planning and management aspects should improve in response to changing climatic, economic, social and environmental situations and what the management, institutional and financial challenges would be for their implementation. Governance aspects (policies, institutions and decision making) and technical and knowledge limitations are a substantial part of the analyses. The case studies argue that reservoirs are essential to build resilience contributing to adaptation to climate variability and change. However, that for them to be effective, they need to be planned and managed within a governance framework that considers long-term perspectives and multi-sector and multi-level actor needs and perspectives.

Dr. Cecilia Tortajada is Senior Research Fellow, Institute of Water Policy, Lee Kuan Yew School of Public Policy, Singapore. The main focus of her work at present is on the future of the world´s water, especially in terms of water, food, energy and environmental securities through coordinated policies.  She has been an advisor to major international institutions like FAO, UNDP, JICA, ADB, OECD, IDRC and GIZ, and has worked in countries in Africa, Asia, North and South America and Europe on water and natural resources and environment-related policies. She is member of the OECD Initiative in Water Governance.