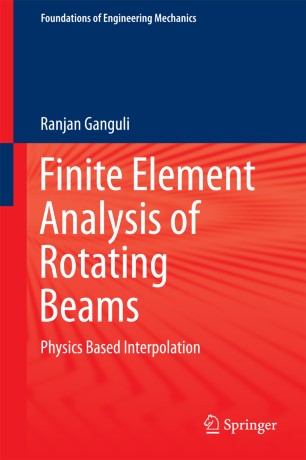 This book addresses the solution of rotating beam free-vibration problems using the finite element method. It provides an introduction to the governing equation of a rotating beam, before outlining the solution procedures using Rayleigh-Ritz, Galerkin and finite element methods. The possibility of improving the convergence of finite element methods through a judicious selection of interpolation functions, which are closer to the problem physics, is also addressed.
The book offers a valuable guide for students and researchers working on rotating beam problems – important engineering structures used in helicopter rotors, wind turbines, gas turbines, steam turbines and propellers – and their applications. It can also be used as a textbook for specialized graduate and professional courses on advanced applications of finite element analysis.

Prof. Ranjan Ganguli obtained his M.S. and PhD in Aerospace Engineering from the University of Maryland, College Park, in 1991 and 1994, respectively, and his B.Tech degree in Aerospace Engineering from the Indian Institute of Technology, Kharagpur, in 1989.
Following his PhD, he worked at the Alfred Gessow Rotorcraft Center of the University of Maryland as Assistant Research Scientist until 1997 on projects on rotorcraft health monitoring and vibratory load validation for the Naval Surface Warfare Center and United Technology Research Center, respectively. He also worked at the GE Research Lab in Schenectady, New York, and at Pratt and Whitney, East Hartford, Connecticut, from 1997 to 2000. He joined the Aerospace Engineering department of the Indian Institute of Science, Bangalore, as Assistant Professor in July 2000. He was promoted to Associate Professor in 2005 and to Full Professor in 2009. He is currently the Satish Dhawan Chair Professor at the Indian Institute of Science, Bangalore. He has held visiting positions at TU Braunschweig, University of Ulm and Max Planck Institute of Metal Research, Stuttgart, in Germany; University Paul Sabatier and Institute of Mathematics, in Toulouse, France; Konkuk University in South Korea, the University of Michigan, Ann Arbor, in USA, and the Nanyang Technological University, Singapore.
Prof. Ganguli's research interests are in helicopter aeromechanics, aeroelasticity, structural dynamics, composite and smart structures, design optimization, finite element methods and health monitoring. He has published 178 articles in refereed journals and over 100 conference papers.  He was awarded the American Society of Mechanical Engineers (ASME) best paper award in 2001, the Golden Jubilee award of the Aeronautical Society of India in 2002, the Alexander von Humboldt fellowship in 2007 and the Fulbright Senior Research fellowship in 2010. Prof. Ganguli is a Fellow of the ASME, a Fellow of the Royal Aeronautical Society, UK, a Fellow of the Indian National Academy of Engineering, a Fellow of the Aeronautical Society of India, an Associate Fellow of the American Institute of Aeronautics and Astronautics and a Senior Member of the Institute of Electrical and Electronic Engineers (IEEE).
He has taught courses on flight and space mechanics, engineering optimization, helicopter dynamics, aircraft structures, structural mechanics, aeroelasticity and navigation. He has supervised the thesis of 15 PhD and 35 Master’s degree students. He has written books on “Engineering Optimization” and “Gas Turbine Diagnostics”, both published by CRC Press, New York, and books titled “Structural Damage Detection using Genetic Fuzzy Systems” and “Smart Helicopter Rotors”,  published by Springer.