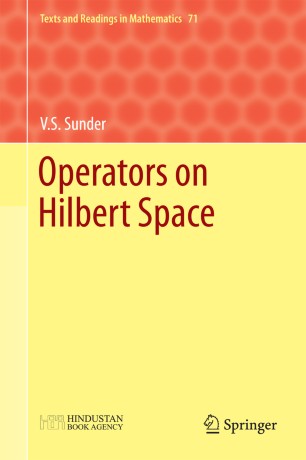 Part of the Texts and Readings in Mathematics book series (TRIM, volume 71)

The primarily objective of the book is to serve as a primer on the theory of bounded linear operators on separable Hilbert space. The book presents the spectral theorem as a statement on the existence of a unique continuous and measurable functional calculus. It discusses a proof without digressing into a course on the Gelfand theory of commutative Banach algebras. The book also introduces the reader to the basic facts concerning the various von Neumann–Schatten ideals, the compact operators, the trace-class operators and all bounded operators.

Vaikalathur Shankar Sunder (or V.S. Sunder) is professor of mathematics at the Institute of Mathematical Sciences (commonly known as MATSCIENCE). He specialises in subfactors, operator algebras and functional analysis in general. In 1996, he was awarded the Shanti Swarup Bhatnagar Prize for Science and Technology, the highest science award in India, in the mathematical sciences category. He is one of the first Indian operator algebraists. In addition to publishing over 60 papers, he has written six books including at least three monographs at the graduate level or higher on von Neumann algebras. One of the books was co-authored with Vaughan Jones, an operator algebraist, who has received the Fields Medal.