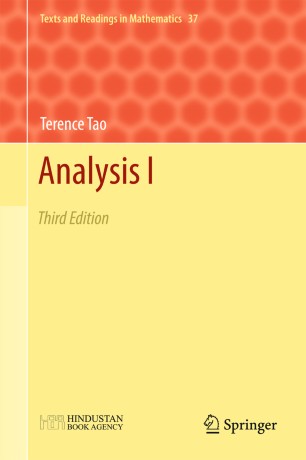 Part of the Texts and Readings in Mathematics book series (TRIM, volume 37)

This is part one of a two-volume book on real analysis and is intended for senior undergraduate students of mathematics who have already been exposed to calculus. The emphasis is on rigour and foundations of analysis. Beginning with the construction of the number systems and set theory, the book discusses the basics of analysis (limits, series, continuity, differentiation, Riemann integration), through to power series, several variable calculus and Fourier analysis, and then finally the Lebesgue integral. These are almost entirely set in the concrete setting of the real line and Euclidean spaces, although there is some material on abstract metric and topological spaces. The book also has appendices on mathematical logic and the decimal system. The entire text (omitting some less central topics) can be taught in two quarters of 25–30 lectures each. The course material is deeply intertwined with the exercises, as it is intended that the student actively learn the material (and practice thinking and writing rigorously) by proving several of the key results in the theory.

Terence "Terry" Chi-Shen Tao, FAA FRS, is an Australian mathematician. His areas of interests are in harmonic analysis, partial differential equations, algebraic combinatorics, arithmetic combinatorics, geometric combinatorics, compressed sensing and analytic number theory. As of 2015, he holds the James and Carol Collins chair in mathematics at the University of California, Los Angeles. Professor Tao is a co-recipient of the 2006 Fields Medal and the 2014 Breakthrough Prize in Mathematics. He maintains a personal mathematics blog, which has been described by Timothy Gowers as “the undisputed king of all mathematics blogs”.