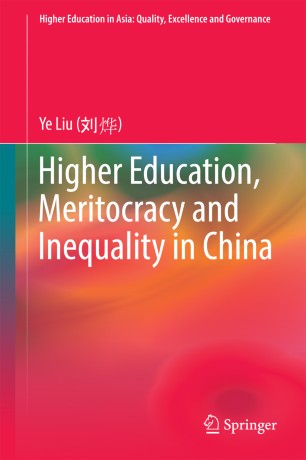 This book investigates the changing opportunities in higher education for different social groups during China’s transition from the socialist regime to a market economy. The first part of the book provides a historical and comparative analysis of the development of the idea of meritocracy, since its early origins in China, and in more recent western thought. The second part then explores higher education reforms in China, the part played by supposedly meritocratic forms of selection, and the implications of these for social mobility.
Based on original empirical data, Ye Liu sheds light on the socio-economic, gender and geographical inequalities behind the meritocratic façade of the Gaokao (高考). Liu argues that the Chinese philosophical belief in education-based meritocracy had a modern makeover in the Gaokao, and that this ideology induces working-class and rural students to believe in upward social mobility through higher education. When the Gaokao broke the promise of status improvement for rural students, they turned to the Chinese Communist Party and sought political connections by actively applying for its membership. This book reveals a bleak picture of visible and invisible inequality in terms of access to and participation in higher education in contemporary China. Written in an accessible style, it offers a valuable resource for researchers and non-specialist readers alike.

Dr Ye Liu is a Lecturer in International Development at the International Development Institute, the King’s College London. She was a Senior Lecturer in International Education at Bath Spa University between 2013 and 2016. She was awarded a PhD in Comparative Sociology in 2011 at the Institute of Education, University of London. She won the 2014 Junior Sociologist Prize by the Research Committee on Women in Society of the International Sociology Association and the 2014 Newer Researcher Award by the Society for Research into Higher Education (SRHE). Over ten years of research she has conducted survey studies, in-depth interviews and observations in China. Covering the topics including access to higher education, cultural capital and education attainment, elite opportunities, the ‘One-Child’ policy, rural youth, geographical and gender inequality, her analysis has paid particular attention to institutional/contextual causes and consequences of shifting socio-political circumstances over the course of the People’s Republic of China that underpin the life chances of various social groups. She has published in highly ranked international journals such as British Journal of Sociology of Education and International Journal of Educational Development. Her media articles on the end of China’s One Child Policy as well as China’s educational success and failures were published in the Conversation.