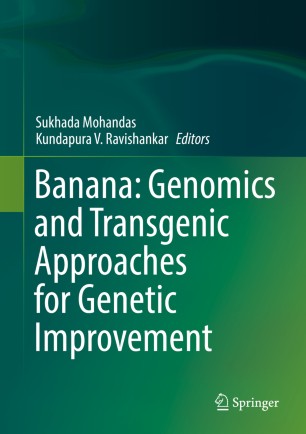 Bananas and plantains are among the most important food and cash crops in the world. They are cultivated in more than 135 countries, across the tropics and subtropics, with an annual global production of ca. 130 million metric tonnes. Though bananas are one of the most important components of food security in many developing countries, banana production is threatened by both abiotic and biotic stresses. These include a wide range of diseases and pests, such as bunchy top virus, burrowing nematodes, black Sigatoka or black leaf streak, Fusarium wilt, etc.
In recent years, considerable progress has been made and several biotechnological and genomic tools have been employed to help understand and unravel the mysterious banana genome. Molecular and genomic studies have helped to decipher the Musa genome and its evolution. Genetic linkage map and whole genome sequencing of both Musa acuminata and Musa balbisiana (progenitors of cultivated banana) have completely changed the way of thinking and the approach on banana crop improvement.  Whole-genome sequencing has helped to improve the selection of quantitative traits such as yield, as well as the selection of optimal parents for developing required hybrids in breeding programs. Gene isolation and the analysis of mutants have helped in the characterization of genes of agronomic value and the associated regulatory sequences. With the advent of molecular markers and new statistical tools, it is now possible to measure the diversity, identify genes and useful alleles linked to important agronomic traits. Further these alleles can be incorporated into cultivars through marker assisted selection or through transgenic approach.  Transgenic approaches are potential tools for direct transfer of these genes into popular cultivars, which are generally not amenable for  conventional breeding techniques, in specific with crops such as bananas which are sterile, triploid and heterozygous thereby making it difficult to reconstruct the recurrent genotypes in banana. Transgenic techniques thus have helped overcome the difficulty of working with sterile, triploid banana crop.    In the last five years, enormous amount of new information and techniques have been generated for banana. A comprehensive book entitled “Banana: Genomics and Transgenic Approaches for Genetic improvement”  on  banana genomics, latest transgenic technologies and tools available for improved crop development in banana will address all these requirements.

Dr. Sukhada Mohandas is currently the Director of company SM Plant Production Technologies Pvt Ltd. in Bangalore involved in development of planting material of banana and other horticultural crop cultivars. She  retired from  Agriculture Research Service of the Indian Council of Agricultural Research  in 2013 after serving in Indian Institute of Horticultural Research, Bangalore, India for 35 years and thereafter as Emeritus scientist for two years. Her group was actively involved in cloning genes and in development of transgenic banana for fusarium wilt resistant for the past one decade. She is a recipient of several awards important among them being 1. Jawaharlal Nehru Award for the best Ph.D thesis -1980, 2. Indian National Science Academy’s Young Scientist Award- 1981, 3. C.N.Patel Industrial Award for women scientists by VASVIK foundation-1993 and 4. Panjabrao- Deshmuk Outstanding Woman Agricultural Scientist Award 1998. She has authored  more than 200 publications.

Dr. K. V. Ravishankar is currently Principal Scientist at ICAR-Indian Institute of Horticultural Research, Bangalore, India. He has  been associated with the Division of Biotechnology for last two decades. His area of research interests are genetics, genomics, association studies and marker assisted breeding  of horticultural crops. His group was involved in the development of microsatellite markers in many  crop species like mango, wild banana Musa balbisiana,  okra, Garcinia indica, G. morella, G. gummigutta. In addition to this, his group works on functional genomics of fusarium wilt , drought and heat tolerance in banana; fruit development and ripening in mango; and  tomato leaf curl virus resistance, early blight tolerance and drought/heat tolerance in tomato. His laboratory is also involved in marker assisted breeding of many horticultural crops. He has published 4 book chapters and over 50 research papers.