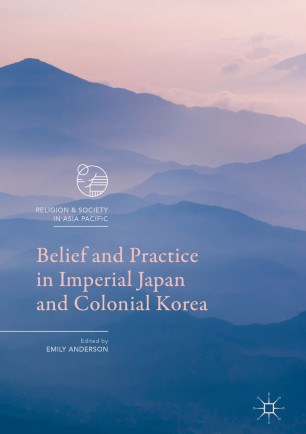 Belief and Practice in Imperial Japan and Colonial Korea

Bringing together the work of leading scholars of religion in imperial Japan and colonial Korea, this collection addresses the complex ways in which religion served as a site of contestation and negotiation among different groups, including the Korean Choson court, the Japanese colonial government, representatives of different religions, and Korean and Japanese societies. It considers the complex religious landscape as well as the intersection of historical and political contexts that shaped the religious beliefs and practices of imperial and colonial subjects, offering a constructive contribution to contemporary conflicts that are rooted in a contested understanding of a complex and painful past and the unresolved history of Japan’s colonial and imperial presence in Asia. Religion is a critical aspect of the current controversies and their historical contexts. Examining the complex and diverse ways that the state, and Japanese and colonial subjects negotiated religious policies, practices, and ministries in an attempt to delineate these “imperial relationships”, this cutting edge text sheds considerable light on the precedents to current sources of tension.

Emily Anderson received her PhD from UCLA in 2010 and from 2010 to 2014 was Assistant Professor of Modern Japanese History at Washington State University (Pullman, WA); in 2014 she was visiting researcher at the New Zealand Asia Institute, University of Auckland. She is the author of Christianity and Imperialism in Modern Japan: Empire for God (2014).