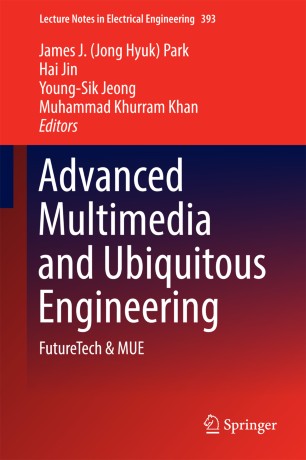 These large international conferences provided an opportunity for academic and industry professionals to discuss recent progress in the fields of multimedia technology and ubiquitous engineering including new models and systems and novel applications associated with the utilization and acceptance of ubiquitous computing devices and systems. The contributions contained in this book also provide more information about digital and multimedia convergence, intelligent applications, embedded systems, mobile and wireless communications, bio-inspired computing, grid and cloud computing, the semantic web, user experience and HCI, security and trust computing.

This book describes the state of the art in multimedia and ubiquitous engineering, and future IT models and their applications.

James J. (Jong Hyuk) Park received his Ph.D. degree at the Graduate School of Information Security at Korea University, Korea. From December 2002 to July 2007 Dr. Park was a research scientist at R&D Institute, Hanwha S&C Co., Ltd., Korea. From September 2007 to August 2009 he was a professor at the Department of Computer Science and Engineering, Kyungnam University, Korea. He is now a professor at the Department of Computer Science and Engineering, Seoul National University of Science and Technology (SeoulTech), Korea. Dr. Park has published about 100 research papers in international journals and conferences. He has been serving as chair, program committee, or organizing committee chair for many international conferences and workshops. He is a president of the Future Technology Research Association International (FTRA) and Korea Information Technology Convergence Society (KITCS). He is editor-in-chief of Human-centric Computing and Information Sciences(HCIS) by Springer, International Journal of Information Technology, Communications and Convergence (IJITCC) by InderScience, and Journal of Convergence (JoC) by FTRA Publishing. He is Associate Editor / Editor of 14 international journals including 8 journals indexed by SCI(E). In addition, he has been serving as a Guest Editor for international journals by some publishers: Springer, Elsevier, John Wiley, Oxford Univ. press, Hindawi, Emerald, Inderscience. His research interests include security and digital forensics, human-centric ubiquitous and pervasive computing, context awareness, and multimedia services. He got the best paper awards from ISA-08 and ITCS-11 conferences and the outstanding leadership awards from IEEE HPCC-09, ICA3PP-10, IEE ISPA-11, and PDCAT-11. Dr. Park is a member of the IEEE, IEEE Computer Society, KIPS, KICS, KIISC, KMMS, KDFS and KIIT.

Young-Sik Jeong is a professor in the Department of Multimedia Engineering at Dongguk University in Korea. His research interests include multimedia cloud computing, information security of cloud computing, mobile computing, IoT(Internet of Things), and wireless sensor network applications. He received his B.S. degree in Mathematics and his M.S. and Ph.D. degrees in Computer Science and Engineering from Korea University in Seoul, Korea in 1987, 1989, and 1993, respectively. He was a professor in the Department of Computer Engineering at Wonkwang University in Korea from 1993 to 2012. He worked and researched to Michigan State University and Wayne State University as visiting professor in 1997 and 2004 respectively. Since 2002, he has been serving as an IEC/TC 100 Korean Technical Committee member, as the IEC/TC 108 Chairman of Korean Technical Committee, and as an ISO/IEC JTC1 SC25 Korean Technical Committee member. Also He is an EiC(Editor-in-Chief) of Journal of Information Processing Systems, an associate editor of JoS(Journal of Supercomputing), IJCS(international Journal of Communication Systems) and an editor of JIT(Journal of Internet Technology), finally an associate editor of Journal of Human-centric Computing(HCIS) and so on. He is also is a member of the IEEE.

Muhammad Khurram Khan is currently working as a Full Professor at the Center of Excellence in Information Assurance (CoEIA), King Saud University, Kingdom of Saudi Arabia. He is one of the founding members of CoEIA and has served as the Manager R&D from March 2009 to March 2012. He developed and successfully managed the research program of CoEIA, which transformed the center as one of the best centers of research excellence in Saudi Arabia as well as in the region. He is the Editor-in-Chief of a well-esteemed ISI-indexed international journal 'Telecommunication Systems' published by Springer-Verlag since 1993 with an impact factor of 1.163 (JCR 2013). He is the Founding Editor of ‘Bahria University Journal of Information & Communication Technology (BUJICT)’. Furthermore, he is the full-time Editor/Associate Editor of several ISI-indexed international journals/magazines, including IEEE Communications Magazine, Journal of Network & Computer Applications (Elsevier), IEEE Access Journal, Security & Communication Networks (Wiley), Journal of Medical Systems (Springer), PLOS ONE (USA), Computers & Electrical Engineering (Elsevier), IET Wireless Sensor Systems, Electronic Commerce Research (Springer), Scientific World Journal (Hindawi), Journal of Computing & Informatics, Journal of Information Hiding and Multimedia Signal Processing (JIHMSP), International Journal of Biometrics (Inderscience), Journal of Physical & Information Sciences, and Journal of Independent Studies and Research-Computing (JISR), etc. He has also played role of the guest editor of several international ISI-indexed journals of Springer-Verlag and Elsevier Science, etc. Moreover, he is one of the organizing chairs of more than 5 dozen international conferences and member of technical committees of more than 10 dozen international conferences. In addition, he is an active reviewer of many international journals.