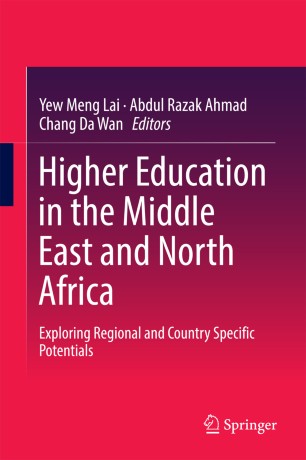 Higher Education in the Middle East and North Africa

This book explores the prospects for higher education development in the Middle East and North African (MENA) region. Adopting a South-South perspective (from the viewpoint of a developing country), it seeks to promote a deeper understanding of this colourful and highly diverse, yet volatile region. As such, it examines six selected MENA countries that serve as case studies for identifying the gaps and challenges as well as their potentials in terms of higher education development. Based on expert interviews and focus-group discussions with more than 85 individuals across the six countries and complemented by related facts and figures from both international and national documents, it presents an in-depth discussion and analysis of the countries’ respective political, security, and economic situations. These serve as preconditions for the cultivation of an environment conducive to facilitating the advancement of higher education. It also provides a critical overview of higher education in these countries, notably in terms of the current national system, legislative framework, accreditation, quality assurance, recognition concerns, and other critical issues that enable and/or constrain the development of their respective higher education sectors, and that of the region, as a whole.

Lai Yew Meng is Associate Professor of Politics and International Relations at the Centre for the Promotion of Knowledge and Language, Universiti Malaysia Sabah. His research interests include contemporary Malaysian politics, Japanese/Chinese foreign policy, and East Asian as well as international security. He has also been involved in higher education-related research. Lai’s notable publications include the co-edited Security Studies: A Reader (Routledge, 2011); Nationalism and Power Politics in Japan's Relations with China: A Neoclassical Realist Interpretation (Routledge, 2014), and “Malaysia’s security concerns: a contemporary assessment”, in Meredith L. Weiss (ed.). Routledge Handbook of Contemporary Malaysia (Routledge, 2015).
Abdul Razak Ahmad is a faculty member at the National Defence University Malaysia and is currently serving as the Special Advisor to the State Government of Johor, Malaysia. He is also the Founding Director of Bait Al Amanah, a political think tank based in Kuala Lumpur. His research interests are in the area of international security, counter-terrorism, human development issues and public policy.
Chang Da Wan (C.D. Wan) is a lecturer at the National Higher Education Research Institute (IPPTN), Universiti Sains Malaysia. He earned his Doctor of Philosophy from the University of Oxford in the field of higher education and was trained as an economist at the University of Malaya and National University of Singapore. His main interests lie in higher education and economics, and has been involved in a number of research and consultancy projects with the Ministry of Higher Education in Malaysia, UNESCO-Bangkok and OECD including the Review of the Malaysian National Higher Education Strategic Plan, doctoral education, academic profession, academic governance and leadership, research and innovation management, transition from secondary to higher education, and prospects for Malaysian higher education in the Middle East and North African region.