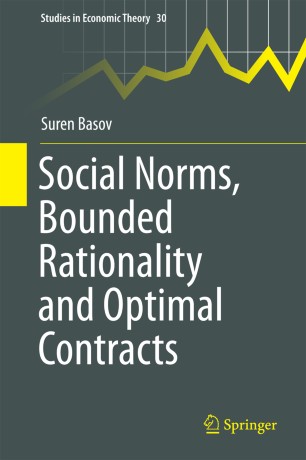 This book investigates the ways in which social norms and bounded rationality shape different contracts in the real world. It brings into focus existing research into optimal contracts, draws important lessons from that research, and outlines prospects for future investigation.
Bounded rationality has acknowledged effects on the power of incentive provisions, such as deviations from sufficient statistic theorem, the power of optimal incentives, and the effects of optimal contracts in multicultural environments. The introduction of social norms to bounded rationality opens up new avenues of investigation into contracts and mechanism design.
This book makes an important contribution to the study of bounded rationality by pulling together many separate strands of research in the area of mechanism design, and providing detailed analysis of the impact of societal values on contracts.