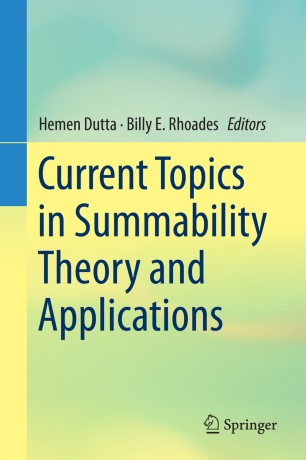 Summability theory is generally used in analysis and applied mathematics. It plays an important part in the engineering sciences, and various aspects of the theory have long since been studied by researchers all over the world.

Hemen Dutta is assistant professor of mathematics at Gauhati University, India. He did his PhD in mathematics from Gauhati University, India. His main research interests are sequence spaces, summability theory, characterization of matrix classes and duality theory. He teaches topics on real analysis, complex analysis, functional analysis, fuzzy sets and their applications, algebra and mathematical logic. He has published several papers in reputed journals and visited several foreign institutions in connection with research collaboration and conference. He has delivered talks at several foreign and national institutions. He is member on the editorial board of several journals of repute and reviewer for some databases and journals of mathematics. He is a member of some mathematical societies and served as joint secretary (honorary) of the Assam Academy of Mathematics for two years.

Billy E. Rhoades is professor emeritus of mathematics at Indiana University, Bloomington, United States. He received his PhD in mathematics from Lehigh University, United States. His main research interests are in summability and fixed point theories. His first academic position was at Lafayette College (1953–1965). In 1965, he joined Indiana University. He had three PhD students. In 1994, he received the Distinguished Services award from the Indiana Section of the Mathematical Association of America. In 1999, at the national meeting of the Mathematics Association of America (MAA) he received the Certificate of Meritorious Service award. With over 400 research papers to his credit, he was honored by the Indian Journal of Mathematics (Allahabad Mathematical Society), in volume 56 in 2014.