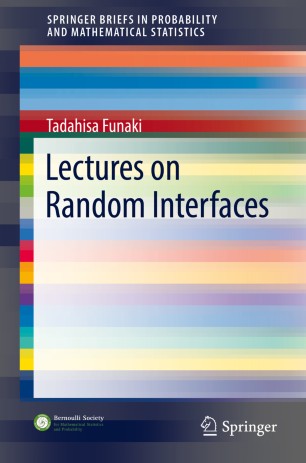 Interfaces are created to separate two distinct phases in a situation in which phase coexistence occurs. This book discusses randomly fluctuating interfaces in several different settings and from several points of view: discrete/continuum, microscopic/macroscopic, and static/dynamic theories. The following four topics in particular are dealt with in the book.
Assuming that the interface is represented as a height function measured from a fixed-reference discretized hyperplane, the system is governed by the Hamiltonian of gradient of the height functions. This is a kind of effective interface model called ∇φ-interface model. The scaling limits are studied for Gaussian (or non-Gaussian) random fields with a pinning effect under a situation in which the rate functional of the corresponding large deviation principle has non-unique minimizers.
Young diagrams determine decreasing interfaces, and their dynamics are introduced. The large-scale behavior of such dynamics is studied from the points of view of the hydrodynamic limit and non-equilibrium fluctuation theory. Vershik curves are derived in that limit.
A sharp interface limit for the Allen–Cahn equation, that is, a reaction–diffusion equation with bistable reaction term, leads to a mean curvature flow for the interfaces. Its stochastic perturbation, sometimes called a time-dependent Ginzburg–Landau model, stochastic quantization, or dynamic P(φ)-model, is considered. Brief introductions to Brownian motions, martingales, and stochastic integrals are given in an infinite dimensional setting. The regularity property of solutions of stochastic PDEs (SPDEs) of a parabolic type with additive noises is also discussed.
The Kardar–Parisi–Zhang (KPZ) equation , which describes a growing interface with fluctuation, recently has attracted much attention. This is an ill-posed SPDE and requires a renormalization. Especially its invariant measures are studied.