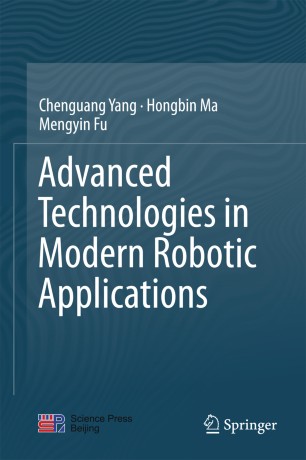 This book presents in a systematic manner the advanced technologies used for various modern robot applications. By bringing fresh ideas, new concepts, novel methods and tools into robot control, robot vision, human robot interaction, teleoperation of robot and multiple robots system, we are to provide a state-of-the-art and comprehensive treatment of the advanced technologies for a wide range of robotic applications. Particularly, we focus on the topics of advanced control and obstacle avoidance techniques for robot to deal with unknown perturbations, of visual servoing techniques which enable robot to autonomously operate in a dynamic environment, and of advanced techniques involved in human robot interaction. The book is primarily intended for researchers and engineers in the robotic and control community. It can also serve as complementary reading for robotics at the both graduate and undergraduate levels.

Chenguang Yang is a young expert in robotics and control. He has made a number of significant achievements in robot control and was awarded the IEEE Transactions on Robotics Best Paper Award in 2011,  WCICA conference Steve and Rosalind Hsia Best Biomedical Paper Award in 2014, and the IEEE ICIA Conference Best Paper Award in 2015.
Hongbin Ma has a strong academic background in control theory and application, and has been an active expert in robotics research and education. He is a recipient of the 13th Huo Ying Dong Young Teacher Award for Higher Education in 2012. His research interest covers adaptation, learning and recognition, especially adaptive estimation ，as well as their applications in robots and autonomous systems.
Mengyin Fu is a professor of Cheung Kong Scholars Program, and famous expert in integrated navigation and intelligent navigation system. His research areas also cover image processing, machine learning and pattern recognition.