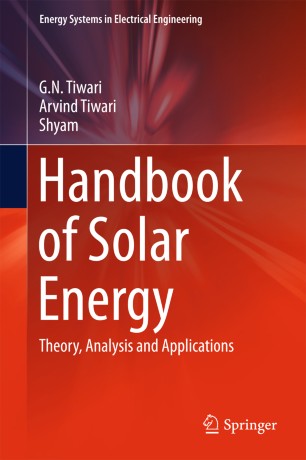 This handbook aims at providing a comprehensive resource on solar energy. Primarily intended to serve as a reference for scientists, students and professionals, the book, in parts,can also serve as a text for undergraduate and graduate course work on solar energy.  The book begins with availability, importance and applications of solar energy, definition of sun and earth angles and classification of solar energy as thermal and photon energy. It then goes on to cover day lighting parameters, laws of thermodynamics including energy and exergy analysis, photovoltaic modules and materials, PVT collectors, and applications such as solar drying and distillation.  Energy conservation by solar energy and energy matrices based on overall thermal and electrical performance of hybrid system are also discussed. Techno-economic feasibility of any energy source is the backbone of its success and hence economic analysis is covered. Some important constants, such as exercises and problems increase the utility of the book as a text.

Professor Gopal Nath Tiwari, received postgraduate and doctoral degrees in 1972 and 1976, respectively, from the Banaras Hindu University, India. Since 1977, he has been actively involved in the teaching program at Centre for Energy Studies, IIT Delhi. His research interests in the field of Solar Energy Applications are solar distillation, water/air heating system, greenhouse technology for agriculture and aquaculture, earth-to-air heat exchangers, passive building design, hybrid photovoltaic thermal (HPVT) systems, climate change, energy security, etc. He has guided about 75 PhD students and published over 550 research papers in journals of repute. He has authored twenty books associated with reputed publishers.He is a co-recipient of the 'Hariom Ashram Prerit S.S. Bhatnagar' Award in 1982. He had been to the University of Papua, New Guinea in 1987-1989 as an Energy and Environment Expert. He was also named European Fellow in 1997, and has been nominated for the IDEA award. He is responsible for development of "Solar Energy Park" at IIT Delhi and Energy Laboratory at University of Papua, New Guinea, Port Moresby. Dr. Tiwari  has successfully coordinated various research projects funded by the Government of India. Dr. Tiwari was Editor of International Journal of Agricultural Engineering for the duration of three years (2006-2008). He is Associate Editor for Solar Energy Journal (SEJ) in the area of Solar Distillation and editor of the International Journal of Energy Research since 2007.  He is also the Chief-Editor of Fundamental of Renewable Energy Applications and servers as a reviewer for many international journals. He was conferred the title of “Vigyan Ratna” by the State of Uttar Pradesh, India on March 26, 2008. He is also founder president of the Bag Energy Research Society that is responsible for energy education in rural India.

Dr. Arvind Tiwari holds a  Bachelor's degree in Physics, a Master of Science in Material Science from Jamia Millia Islamia, and a Master of Technology in Microelectronics from Punjab University (2002). He completed his PhD in 2006 from IIT DElhi(Hybrid Photovoltaic Thermal System). He is a post-doctoral fellow from University of Twente, Netherland.  Besides, several other teaching engagements throughout his career, Dr Tiwari has worked as an Indian Expert in the capacity of senior lecturer in Manmohan Memorial Polytechnic, Morang, Nepal on deputation by the Government of India from January 2010 to January 2012. At present, he is working as Professor in Qassim University, Kingdom of Saudi Arabia.
To his credit he has more than 20 research papers in international journals of repute. He has co-supervised 3 PhD students at IIT Delhi and is currently supervising an additional 4 PhD students. He is also reviewer of many international journals including Solar Energy, Energy Research, and Journal of Open Access.

Mr. Shyam holds a Bachelor of Science degree (BSc) majoring in Mathematics, Physics and Chemistry and Master of Science degree (MSc.) in Physics from the University of Allahabad. He also holds a Master of Technology degree (MTech) in Cryogenic Engineering from Indian Institute of Technology, Kharagpur, India.  During his MTech programme he worked on Giant Magnetoimpedance (GMI) effect in manganites and developed a magnetic position sensor based on GMI effect. He worked as an Assistant Professor at Marathwada Institute of Technology, Bulandshahr from August 2008 to October 2012 and taught Engineering Physics at the undergraduate level.
Presently, he is pursuing a PhD under the supervision of Prof. G. N. Tiwari at the Centre for Energy Studies, Indian Institute of Technology Delhi. His areas of research interest are solar thermal collectors (modelling and experiments), photovoltaics, heat and mass transfer, exergy, CO2 mitigation, climate change and carbon trading, and exergoeconomic and enviroeconomic analyses.