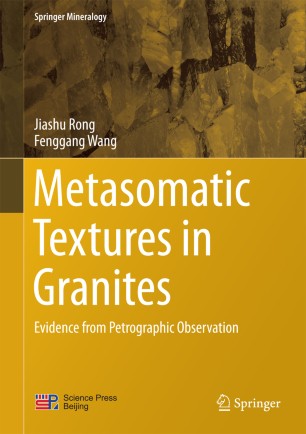 Based on hundreds of thin sections from granite in China, this book introduces metasomatic textures and their formation mechanism in granite. It also proposes that metasomatic textures can basically be classified into two patterns: hetero-oriented replacement and co-oriented replacement, according to the consistency of orientations of replacive and replaced minerals. The hetero-oriented albitization of K-feldspar is quite distinct from the co-oriented albitization of K-feldspar. They occur separately without transition, although both are generally referred to as albitization of K-feldspar.
This unique granite atlas uses a series of color microphotos taken with a quartz plate under crossed polars to clearly illustrate metasomatic mechanisms and superimposed metasomatic processes. The origins of clear albite rim, intergranular swapped albite, K-feldspathization, quartzification, muscovitization, beryllization, myrmekite, small platy albite, perthitic albite, K-feldspar megacryst etc. are comprehensively discussed and explained. The book will appeal to teachers, researchers and students involved in igneous and metamorphic petrology.

Jiashu Rong graduated from Beijing Geological Institute in 1953. Two years later, he was sent to the former Soviet Union to learn aero-method applied to regional geological survey for one year. He began his research on granites since 1957, when he was busy with Nanling Regional Geological Expedition. As a summary of his work, he edited a book entitled “Preliminary Research on Nanling Intrusions”, which was published by Geological Publishing House in 1959. In 1962-1965 he was appointed head of granite research group in Petrological Department under Geological Institute, Chinese Academy of Science. Then he was sent to Guangdong, working on prospecting for uranium deposits during 1965-1972. In 1973 he worked in Beijing Research Institute of Uranium Geology, engaging in research on characteristics of uranium-bearing granite. Since 1974 he was elected as a member of Committee of Igneous Petrology in Chinese Society of Geology. He was appointed deputy director, and then director of Research Department of Hydrothermal Uranium Deposits, Beijing Research Institute of Uranium Geology for the term 1980-1985. In 1987 he was promoted as senior engineer (professor rank), and won special subsidy from the State Council of PRC. He has published 21 articles in scientific journals. He has won five National or Ministerial Science and Technology Progress Award. He devotes himself to the metasomatic textures in his retired life.

Fenggang Wang graduated from Northeastern University in 2002, with the Bachelor of Geological mineral exploration and he obtained his Master of Uranium geology from Beijing Research Institute of Uranium Geology in 2008. He is one of the leaders of the National Nuclear Energy Development Programme. His research fields cover Uranium geology, petrology and mineralogy. He has published more than 20 papers in many peer-reviewed journals as the main author or co-author, covering uranium geology, petrology, mineralogy, as well as hydrological geology. He has won one Provincial Science and Technology Award.