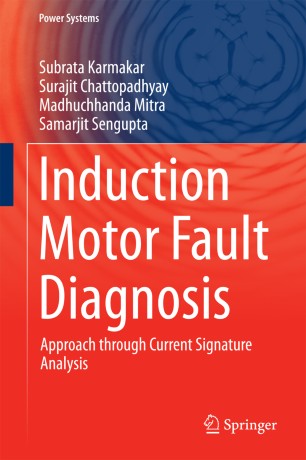 Chapters three to seven describe the assessment of each of the five primary fault types. In the third chapter the rotor broken-bar fault is discussed and then two methods of diagnosis are described; (i) diagnosis of the fault through Radar analysis of stator current Concordia and (ii) diagnosis through envelope analysis of motor startup current using Hilbert and Wavelet Transforms. In chapter four, rotor-mass unbalance faults are assessed, and diagnosis of both transient and steady state stator current has been analyzed using different techniques. If both rotor broken-bar and rotor-mass unbalance faults occur simultaneously then for identification an algorithm is provided in this chapter. Chapter five considers stator winding faults and five different analysis techniques, chapter six covers diagnosis of single phasing faults, and chapter seven describes crawling and its diagnosis.

Finally, chapter eight focuses on fault assessment, and presents a summary of the book together with a discussion of prospects for future research on fault diagnosis.

Subrata Karmakar, born in the year 1966 in West Bengal, India completed his graduation with Honours in Physics from the Ramakrishna Mission Residential College, Narendrapur in West Bengal under University of Calcutta, Kolkata, India. Subsequently, he obtained B. Tech & M. Tech in electrical engineering and Ph. D (technology) from the same university. His employment experience includes both private and government sector. In private sector he worked as Sr. Electrical Engineer (Design). He was in National Institute of Technology, Sikkim, India as faculty In-charge and Assistant Professor (adhoc). Now he is associated with the University of Calcutta as Assistant Secretary, University College of Science, Technology and Agriculture. His special field of interest includes motor fault analysis. He has published 15 papers in journals and conferences.

Surajit Chattopadhyay has obtained B. Sc. Degree in Physics Honours from Ramakrishna Mission Vidyamandir (Belur Math), University of Technology in 1998, and then B. Tech., M. Tech. & Ph. D. (Technology) Degree in electrical engineering from Department of Applied Physics of University of Calcutta in 2001, 2003, 2010 respectively. He has obtained CEng from Engineering Council, UK in 2013. He has authored/coauthored around 97 papers published in international and national journals and conferences and three books. Seven papers have been selected as “Best Paper” in international level. He has visited many countries for technical interaction like in Lyon (France), Kuala Lumpur (Malaysia), Dhaka (Bangladesh), London & Stevenage (UK) and Negombo (Sri Lanka) and presented his work in different international forums. Presently, he is Dean (Student Welfare) and Associate Professor of Electrical Engineering in Ghani Khan Choudhury Institute of Engineering and Technology (under Ministry of HRD, Govt. of India). He is Hon. Secretary of the Institution of Engineering and Technology (UK), Kolkata Network since 2013. His field of interest includes electric power quality, fault diagnosis, power system protection, signal analysis, robotics application and UAV.

Dr. Madhuchhanda Mitra was born in Kolkata, India in 1961. She received her B.Tech., M.Tech. and Ph.D (Tech) degrees in 1987, 1989 and 1998, respectively, from University of Calcutta, Kolkata, India. At present she is Professor in the Department of Applied Physics, University College of Technology, University of Calcutta, India, where she has been actively engaged in both teaching and research. She is the co-author of 150 research papers pertaining to the problems of fault analysis, biomedical signal processing, data acquisition and processing and material science. Her total citation is 1088, h-index is 15 and i-10 index is 24. She is a recipient of “Griffith Memorial Award” of the University of Calcutta.

Samarjit Sengupta holds a B.Sc, B.Tech, M.Tech, and Ph.D from the University of Calcutta, Kolkata, India. He is currently a professor of electrical engineering in the Department of Applied Physics at the University of Calcutta. He has published 130 journal papers and eight books on various topics of electrical engineering. His main research interests include power quality instrumentation, power system stability, and security and power system protection. He is a fellow of IET and IETE, as well as a senior member of IEEE. He is former Chairman of IET (UK) Kolkata Network.