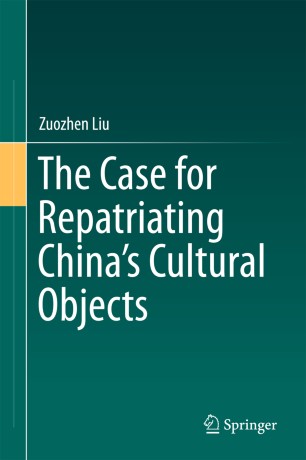 This book investigates China's demands for the repatriation of Chinese cultural relics 'lost' during the country's modern  history. It addresses two main research questions: Can the original owners, or their rightful successors, of cultural objects looted, stolen, or illicitly exported before the adoption of the 1954 Hague Convention and the 1970 UNESCO Convention reclaim their cultural objects pursuant to remedies provided by international or national law? And what are the philosphical, ethical, and cultural considerations of identity underlying the international conventions protecting cultural objects and claims made for repatriating them? The first part of the book explores current positive legal regimes, while the second part focuses on the philosphical, ethical, and cultural considerations regarding repatriation of cultural objects. Consisting of seven chapters and an introduction, it outlines the loss of Chinese cultural relics in modern history and the normative framework for the protection of cultural heritage. It presents case studies designed to assess the possibility of seeking legal remedies for restitution under contemporary legal regimes and examines the cultural and ethical issues underpinning the international conventions protecting cultural heritage and claims for the repatriation of cultural heritage. It also discusses issues of cultural identity, the right to cultural identity and heritage, multiculturalism, the politics of recognition, cosmopolitanism, the right to cultural heritage, and other related issues.  The concluding chapter answers the two research questions and offers suggestions for future research.