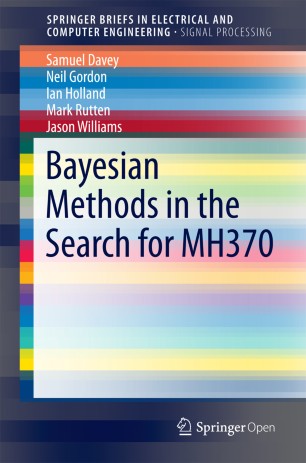 Bayesian Methods in the Search for MH370

This book demonstrates how nonlinear/non-Gaussian Bayesian time series estimation methods were used to produce a probability distribution of potential MH370 flight paths. It provides details of how the probabilistic models of aircraft flight dynamics, satellite communication system measurements, environmental effects and radar data were constructed and calibrated. The probability distribution was used to define the search zone in the southern Indian Ocean.

“I enjoyed every moment of reading this book, which is pedagogical, informative, and full of suspense. The writing is crisp and to the point, illustrating the depth and complexity of current aviation accident investigation techniques and the skills of the experts in this field. I advise both statisticians and aviation enthusiasts to have a look at this book … .” (P. Jouvelot, Computing Reviews, April, 2017)
PDF
EPUB