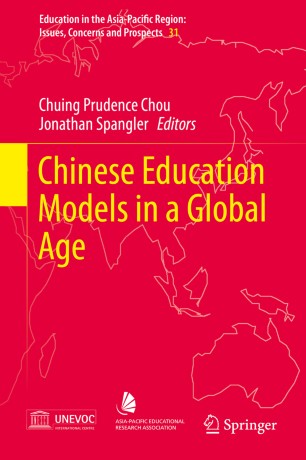 Part of the Education in the Asia-Pacific Region: Issues, Concerns and Prospects book series (EDAP, volume 31)

China’s rise, an increasing emphasis on international education benchmarking, and a global recognition of East Asian countries’ success in this regard have brought the issue of Chinese education to the forefront of public consciousness. In particular, the concept of a “Chinese education model” is one that has sparked debate and quickly become a major focus of education research around the world, especially in light of regional achievements vis-à-vis university rankings, bibliometric indices, the Programme for International Student Assessment (PISA), Trends in International Mathematics and Science Study (TIMSS), and other such benchmarks. Chinese Education Models in a Global Age tackles this controversial issue head on by synthesizing a diversity of analyses from a world-class team of twenty-seven authors. It reveals that Chinese education models, which are present in many different geographic and institutional contexts, have an important influence on social and institutional norms as well as individual belief systems and behaviors in China and beyond. The first of its kind, this edited volume establishes a foundation for future research while providing a nuanced and tightly integrated compilation of differing perspectives on the role and impact of Chinese education models worldwide. It is essential reading for all scholars, policymakers, students, parents, and educators interested in the rising demographic and economic influence of people of Chinese descent on education around the world.
“This book of essays on Chinese Education Models in a Global Age moves easily through both theory and practice on this important topic.  The editors, Chou and Spangler bring years of experience and background to giving shape to this topic and selecting the best authors to tackle the carefully chosen chapters.  The book provides compelling and thoughtful treatment of the historical background of China’s influence on higher education, both in “greater China” and Chinese communities abroad.  This book will appeal to those who seek to grasp the complexity of the notion of hybrid higher education as well as the impact of China on the Asia Pacific region.  It is masterfully suited to both Asian and non-Asian audiences.”
John Hawkins, Professor Emeritus, University of California, Los Angeles
“To citizens of a globalized world, this volume is a fascinating collection of works that move beyond fixed boundaries and even reach a global perspective in some cases. It urges readers to think out of the box, linking together East and West as well as past and present. While focusing on Chinese educational models, the discussions not only show the inroads other places have made into them, but also demonstrate their implications for others especially in a context of a rising Chinese power. This book invites and guides you to think globally about the local.”
Rui Yang, Professor of Education, The University of Hong Kong