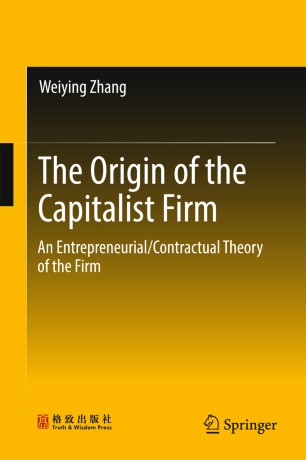 The Origin of the Capitalist Firm

An Entrepreneurial/Contractual Theory of the Firm

The book addresses the entrepreneurial origin of the capitalist firm and its asymmetric contractual relationships between capitalists, workers, managers and entrepreneurs, and explains the origin of the firm by focusing on entrepreneurship. A hidden action model shows how assigning residual claim to entrepreneurs can provide a better overall incentive; a hidden information model demonstrates that capitalists are given priority and have authority to select the management, because capital can signal  entrepreneurial ability; and a general equilibrium entrepreneurial model shows that the equilibrium relationships between different members of the firm depend on the joint distribution of ability, wealth and risk attitudes in the population. Overall, the book reveals that the capitalist firm is more efficient, not only because it provides better incentives but also because it ensures that the most entrepreneurial people control the firm.

Weiying Zhang is the Sinar Mas Chair Professor of Economics National School of Development, Peking University. He received D. Phil in economics from Oxford. His research interests are industrial organization and theory of the firm; game and society; corporate governance; economic transition in China; law and economics; strategy and competitiveness and philosophy of economics. His published books including Game Theory and Information Economics, The Theory of the Firm and Chinese Enterprise Reform, The Logic of the Market: An Insider’s View of Chinese Economic Reform, etc. all have great academic impact. His insightful and provocative opinions about China’s reform have been widely reported both in China and in international media (such as WSJ, FT and NYT).