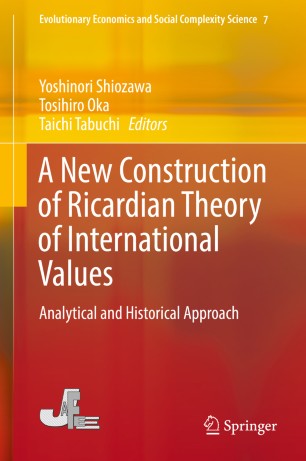 A New Construction of Ricardian Theory of International Values

This is the first book published in English on the new international value theory, presented by Yoshinori Shiozawa in 2007. Shiozawa submitted a solution to the question on international values since Ricardo by constructing a Ricardo–Sraffa model on trading economies with M countries and N commodities including intermediate inputs (normally M < N). The new theory is based on the assumption that prices are determined by production costs, which is the property derived from the classical value theory. The papers collected here deal with the following: introducing readers to the new theory; presenting diagrammatic illustrations of the new theory; analysing efficient patterns of specialization allowing intermediate inputs; examining how the new theory gives a new horizon to the Neo-Ricardian trade theory; investigating competitiveness, the long-period method, and potentiality from the perspectives of the new theory; discussing Mill's conversion toward neoclassical revolution; scrutinizing how the concept of comparative advantage has developed and diverged from Ricardo’s trade theory; discussing the purification of Marshall's value theory through Mill’s influence; reviewing the controversies on international values among Japanese economists; considering the value-added trade based on the Ricardian value theory; and lastly giving a mathematical explanation of the definitions and theorems of the new theory.