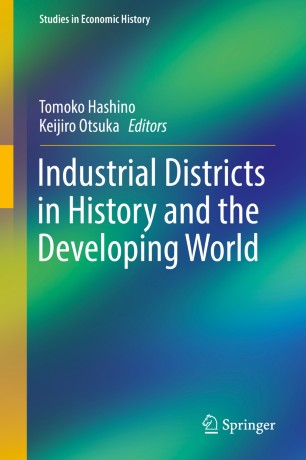 Industrial Districts in History and the Developing World

This book sheds new light on the role of industrial districts in the industrial development of the past and present. Industrial districts, which refer to the geographical concentration of enterprises producing similar or closely related commodities in a small area, play a significant role in the development of manufacturing industries not only historically in Europe and Japan but also at present in emerging East Asian economies, such as China and Vietnam and low-income countries in sub-Saharan Africa. The book identifies similarities in the development patterns of industrial districts in history and the present and analyzes the reasons for these similarities. More specifically, the book examines whether Marshallian agglomeration economies provide sufficient explanations and seeks to deepen understanding about the important factors that are missing.

Despite the common issues addressed by economic historians and development economists regarding the advantages of industrial districts for industrial development, discussion of these issues between the two groups of researchers has been largely absent, or at best weak. The purpose of this book is to integrate the results of case studies by economic historians interested in France, Spain, and Japan and those by development economists interested in the contemporary industries still developing in China, Vietnam, Bangladesh, Tanzania, and other countries in sub-Saharan Africa.

Tomoko Hashino is a professor of economic history at Kobe University. Her research interests are in the evolutionary process of the textile industry in Japan as well as the development history of weaving districts in modern Japan. Her recent articles have appeared in the Economic History Review, Business History Review, Australian Economic History Review, and Journal of the Japanese and International Economies. Professor Hashino received her Ph.D. in economics from Hitotsubashi University in 2003. She has been a visiting fellow at the University of New South Wales, the London School of Economics and Political Science, and George Washington University.

He has been working extensively on the Green Revolution, land tenancy, property rights and natural resource management, cluster-based industrial development, and poverty dynamics. His studies are primarily survey-based with comparative perspectives between Asia and Sub-Saharan Africa.