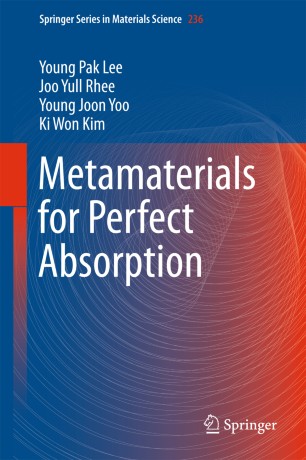 This book provides a comprehensive overview of the theory and practical development of metamaterial-based perfect absorbers (MMPAs). It begins with a brief history of MMPAs which reviews the various theoretical and experimental milestones in their development. The theoretical background and fundamental working principles of MMPAs are then discussed, providing the necessary background on how MMPAs work and are constructed. There then follows a section describing how different MMPAs are designed and built according to the operating frequency of the electromagnetic wave, and how their behavior is changed. Methods of fabricating and characterizing MMPAs are then presented.

The book elaborates on the performance and characteristics of MMPAs, including electromagnetically-induced transparency (EIT). It also covers recent advances in MMPAs and their applications, including multi-band, broadband, tunability, polarization independence and incidence independence.

Suitable for graduate students in optical sciences and electronic engineering, it will also serve as a valuable reference for active researchers in these fields.

Prof. YoungPak Lee is Distinguished Professor in Department of Physics in Hanyang University, Director in Quantum Photonic Science Research Center and Chairman in Committee for Basic Science Education in Academy of Science and Technology. His present research activity is; magnetic photo crystals and metamaterials and applications to renewable energy; magneto-optical, magnetic, optical and transport properties, and electronic structures of thin films and nano structures; nanoscopic investigation of morphology and magnetic domain; nonlinear and time-resolved magneto-optical spectroscopy; magnetic semiconductors based on oxides; analysis of magnetic surfaces and films by using synchrotron radiation; magnetic bio-systems; characterization of the surfaces and interfaces of thin films including multilayers. Prof. Lee was the President of Koran Physical Society and Korean Federation of Physics-related Societies. He published 642 SCI papers and h-index is 44.

Ki Won Kim received his Ph.D. degree in Physics from Yonsei University, Seoul, Korea, in 1995. He is working as a professor at Department of Information Display, Sunmoon University, Asan, Korea, from 1996. He worked as the Editor-in-Chief of Journal of the Korean Vacuum Society during 2013-2014. His research interests include metamaterials working in the MHz to THz regime, magnetic and magneto-optical properties of thin films, and analysis of magnetic surface and thin films by using synchrotron radiation.