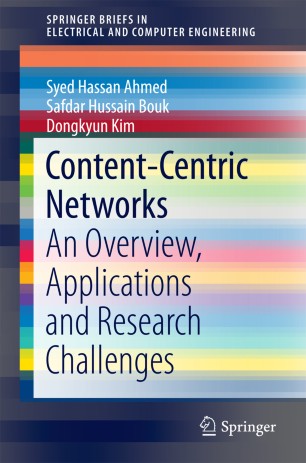 An Overview, Applications and Research Challenges

This book introduces Content-Centric Networking (CCN), a networking paradigm that provides a simple and effective solution to the challenging demands of future wired and wireless communications. It provides an overview of the recent developments in the area of future internet technologies, bringing together the advancements that have been made in Information-Centric Networking (ICN) in general, with a focus on CCN.

It begins with an introduction to the basics of CCN is followed by an overview of the current internet paradigm and its challenges. Next, an application perspective has been included, where the authors encompass the selected applications for CCN with recent refereed research and developments. These applications include Internet of Things (IoT), Smart Grid, Vehicular Ad hoc Networks (VANETs), and Wireless Sensor Networks (WSNs).

The book is a useful reference source for practising researchers, and can be used as supporting material for undergraduate and graduate level courses in computer science and electrical engineering.

Syed Hassan Ahmed received his B.S in Computer Science from Kohat University of Science and Technology (KUST), Kohat, Pakistan. Later on, he joined School of Computer Science and Engineering, Kyungpook National University, Korea, where he completed his Masters in Computer Engineering. Currently, he is pursuing his PhD in Computer Engineering at Monet Lab, KNU, Korea. In 2015, he has been a visiting researcher at the Georgia Institute of Technology, Atlanta, USA. Since 2012, he has published over 50 International Journal and Conference papers in the multiple topics of wireless communications. Along with several book chapters, he also authored 2 Springer brief books. He is also an active IEEE/ACM member and serving several reputed conferences/journals as a TPC and Reviewer respectively. For the three consecutive years, 2014-2016, he won the Best Research Contributor awards in the workshop on Future Researches of Computer Science and Engineering, KNU, South Korea. His research interests include WSN, Underwater WSN, Cyber Physical Systems, VANETs and Information Centric Networks in Vehicular Communications.

Safdar Hussain Bouk was born in Larkana, Pakistan in 1977. He received the B.S. degree in Computer Systems from Mehran University of Engineering and Technology, Jamshoro, Pakistan, in 2001 and M.S. and Ph.D. in Engineering from the Department of Information and Computer Science, Keio University, Yokohama, Japan in 2007 and 2010, respectively. Currently he is a working as a Postdoctoral Fellowship at Kyungpook National University, Daegu, Korea. His research interests include wireless ad-hoc, sensor networks, underwater sensor networks, and information centric networks.

Dongkyun Kim received the BS degree from the Department of Computer Engineering, Kyungpook National University, Daegu, Korea. He also received the MS and PhD degrees from the School of Computer Science and Engineering, Seoul National University, Seoul, Korea. He was a visiting researcher at the Georgia Institute of Technology, Atlanta, in 1999. He also performed a postdoctorate program in the Computer Engineering Department, University of California at Santa Cruz, in 2002. He has been organizing committee or technical program committee in many IEEE or ACM conferences. He received the Best Paper Award from the Korean Federation of Science and Technology Societies, 2002. He has been doing many editorial activities in several well-reputed international journals. Currently, he is a professor in the School of Computer Science and Engineering, Kyungpook National University, Daegu, Korea. His current research interest includes connected cars, vehicular ad hoc networks, Internet of Things (M2M/D2D), Wi-Fi networks (including Wi-Fi Direct), wireless mesh networks, wireless sensor networks, and Future Internet. He is a member of the IEEE.