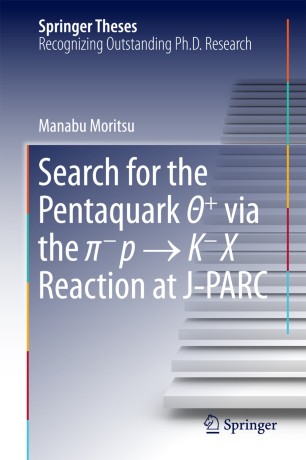 This theses reports on an experimental search for an exotic hadron, Θ+(1540) pentaquark, which is a genuine exotic hadron with a five-quark system of uuddsbar. The results of this book support that the existence of Θ+ was strongly constrained.

The Θ+ pentaquark was searched for via the π- p → K- X reaction using a beam momentum of 2.01 GeV/c at the J-PARC hadron experimental facility, taking advantage of high-statistics and high-resolution compared with previous experiments, some of which claimed the evidence of Θ+. In order to realize a good missing-mass resolution of 2 MeV, the beam spectrometer and superconducting kaon spectrometer were constructed.

No clear peak was observed in the missing mass spectrum of the π- p → K- X reaction, and the upper limit of the production cross section was found to be less than 0.28 μb/sr at the 90% confidence level in a mass region of 1500–1560 MeV/c2. This upper limit is an order of magnitude smaller than that of the previous KEK experiment. Compared with a theoretical calculation using the effective Lagrangian approach, the decay width of Θ+ was evaluated. The upper limits on the decay width were estimated to be 0.36 and 1.9 MeV for the Θ+ spin-parity of 1/2+ and 1/2-, respectively. These are quite small for a width of ordinary hadron resonances, and the existence of Θ+ was strongly constrained and is doubtful.