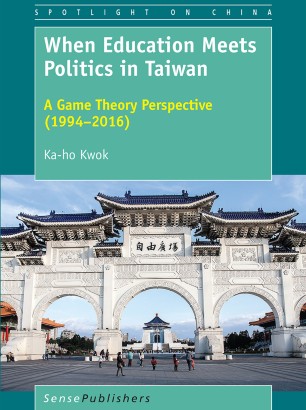 When Education Meets Politics in Taiwan

Part of the Spotlight on China book series (SPOT)

Politics affect education, particularly in transitional societies. It is obvious that Taiwan’s education reform and democratization share the same set of players. All major educational players played a role at different stages in the electoral process striving for popular support. This book applies game theoretic tools and proposes “dynamic positioning” as a new framework that regards Taiwan’s education reform from 1994 to 2016 as the outcome of players’ strategic interactions (instead of top-down or bottom-up). The complex interplay is characterized by the continual adjustment of one’s preferences and strategies in response to other players’ moves. This concept helps explain how and why Taiwan’s education reform was once embraced by most players (cooperation), but became a battlefield between different camps (non-cooperation) soon after a change of the ruling party in 2000. It disputes various structural approaches on educational change, including functionalism, conflict theory, globalization, and theories of liberal democracy. It also contributes to the field of game theoretical studies in education and the specific literature of politics, social change, and education reform.