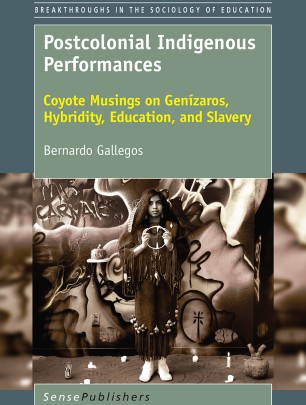 The essays in this volume contain a symphony of carefully orchestrated narratives that engage a wide-ranging assemblage of topics including immigration, indigenous identity, Genízaros, hybridity, education, religious syncretism, and United States and Spanish imperialism. Utilizing excavated memory, archival history, and employing the work of performance and postcolonial theorists, the author examines Native American slavery and captivity in the Spanish Colonial Southwest, with emphasis on Coyotes (indigenous mixed-bloods) of Pueblo/Spanish ancestry as well as descendants of Indigenous servants. The essays engage the cultural politics of education within the context of hybrid religious practices such as pilgrimages to el Cerro de Tepeyac, the site of veneration of the pre-Columbian Goddess Tonanztin and her contemporary, la Señora de Guadalupe; el Santuario de Chimayo, the pre-Hispanic Tewa religious site that continues to serve as the destination for pilgrims, albeit now draped in Catholic ritual; and the Comanche dance ceremony of the Saracino sisters of Atrisco. The essays emerge in part from the author’s childhood in the Barelas and Atrisco neighborhoods of Albuquerque, two of several mixed-blood indigenous communities of New Mexico plagued by a devastating heroin epidemic in the 1950s and 60s. “Bernardo Gallegos has produced a stunning achievement. Postcolonial Indigenous Performances: Coyote Musings on Genízaros, Hybridity, Education, and Slavery is an emotionally gripping, beautifully written, and intellectually captivating page turner that theorizes the ‘Genízaro story’ in a way that brings the genocidal underpinnings of the colonial agenda to light.” – Angela Valenzuela, College of Education, University of Texas at Austin “Postcolonial Indigenous Performances: Coyote Musings on Genízaros, Hybridity, Education, and Slavery is a brilliant expression of complexities, contours, and nuances of indigenous lived experience. It is told through the eyes and the being of Bernardo Gallegos, who lived inside that experience, knowing the ghosts of its distant past and relationships of its recent present.” – William H. Schubert, Professor Emeritus of Curriculum and Instruction and former University Scholar, University of Illinois at Chicago “This beautifully written book shows how the past horrors of Native American subjugation and enslavement can haunt the lives of their descendants. Bernardo Gallegos’ superb research and personal narrative tells the story of colonial New Mexico and the resulting psychological damage on future generations. I’m still haunted by the effect on me of the Choctaw march on the Trail of Tears.” – Joel Spring, City University of New York