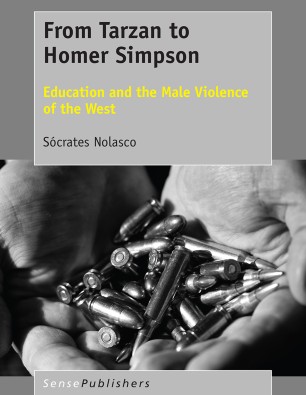 From Tarzan to Homer Simpson

Education and the Male Violence of the West

Men have lower life expectancy than women; they account for 90% of the incarcerated population; they die more often in traffic accidents, from alcohol and drug consumption, and they commit more suicides than women. Since that information has been accessible for a long time, why is it not taken into account when campaigns are created and actions are defined? Violence is not an ‘entity’: it is male. Confronted with that reality, the author sought to formulate the question orientating towards the following working hypothesis: this ‘common knowledge’ should be forgotten, given that the involvement of men in situations of violence plays an important role in the preservation of political ideation in contemporary societies. During this study it became clear that men are exposed to a more complex type of death than mere physical death, but just as important, which is relative to their social representation. This insight led to understanding other aspects that could be associated with men’s intense involvement in situations of violence. Could it be that in contemporary culture a purpose is served by keeping men involved with situations of violence? If so, what might that be?