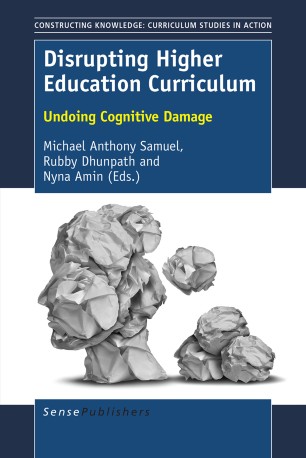 Discomfort with the inappropriateness of university curricula has met with increasing calls for disruptive actions to revitalise higher education. This book, conceived to envision an alternative emancipatory curriculum, explores the historical, ideological, philosophical and theoretical domains of higher education curricula. The authors acknowledge that universities have been and continue to be complicit in perpetuating cognitive damage through symbolic violence associated with indifference to the pernicious effects of race categorisation, gender inequalities, poverty, rising unemployment and cultural hegemony, as they continue to frame curricula, cultures and practices. The book contemplates the project of undoing cognitive damage, offering glimpses to redesign curriculum in the 21st century. The contributors, international scholars, emergent and expert researchers, include different nationalities, orientations and positionalities, constituting an interdisciplinary ensemble which collectively provides a rich commentary on higher education curriculum as we know it and where we think it could be in the future. The edited volume is a catalytic tool for disrupting canonised rituals of practice in higher education. “It has been a while since a scholarly book, so authoritative in its claims and innovative in its concepts, threatens to shake up the curriculum field at its foundations. Rich in metaphor and meaning, the superbly written chapters challenge a field that once more became moribund as we settled (sic) far too comfortably into accepting handed-down frames and fictions about knowledge, authority, power and agency that imprint ‘cognitive damage’ on those forced to the margins of schools and universities. Disrupting Higher Education Curriculum demonstrates, however, that it is in fact from those margins of the education enterprise that academics, teachers and learners can see more clearly how patterns of thought and action hold us back from placing and experiencing our African humanity at the centre of the curriculum.” – Jonathan Jansen, Rector and Vice Chancellor of the University of the Free State, South Africa