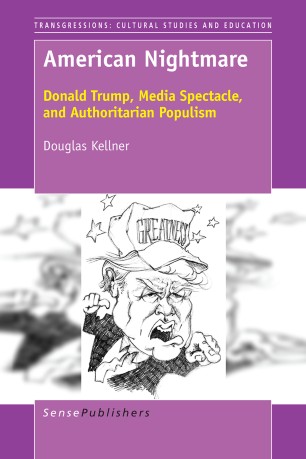 "Explaining the Donald Trump phenomenon is a challenge that will occupy critical theorists of U.S. politics for years to come. Firstly, Donald Trump won the Republican primary contest and is now a contender in the U.S. Presidential Election because he is the master of media spectacle, which he has deployed to create resonant images of himself in his business career, in his effort to become a celebrity and reality-TV superstar, and now his political campaign. More disturbingly, Trump embodies Authoritarian Populism and has used racism, nationalism, xenophobia, Islamophobia, and the disturbing underside of American politics to mobilize his supporters in his successful Republican primary campaign and in the hotly contested 2016 general election.
The Trump phenomenon is a teachable moment that helps us understand the changes and contour of U.S. politics in the contemporary moment and the role of broadcast media, new media and social networking, and the politics of the spectacle. Trump reveals the threat of authoritarian populism, a phenomenon that is now global in scope, and the dangers of the rise to power of an individual who is highly destructive, who represents the worst of the 1 percent billionaire business class who masquerades as a “voice of the forgotten man” as he advances a political agenda that largely benefits the rich and the military, and who is a clear and present danger to U.S. democracy and global peace. The book documents how Trump’s rise to global celebrity and now political power is bound up with his use of media spectacle and how his use of authoritarian populism has created a mass movement beyond his presidency and a danger to the traditions of U.S. democracy as well as economic security and world peace."