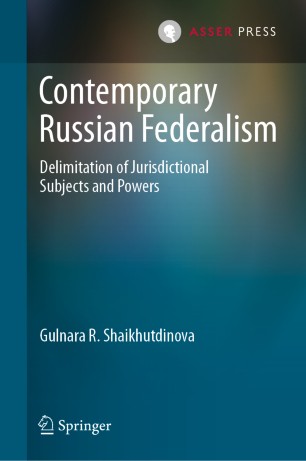 Delimitation of Jurisdictional Subjects and Powers

The focus of this book is the legal analysis of the evolution of federal relationships from an asymmetric treaty-constitutional federation to a de facto unitary state. Questioned is whether it is worth returning to the asymmetric federative form, while the aim is to review the origins of federalism in the New Russia, assess the present de jure and de facto situations and analyze whether Russia has a chance of reviving federalism.
Steps forward on the way to developed federal relationships in the 1990s have been replaced by steps backwards owing to unitary tendencies in the 2000s and the 2010s. But is this a sustainable state of affairs? The possible ways of framing relations between the center and the constituent units for the next four years and beyond are also discussed.
This book is aimed at researchers and students in the field of comparative constitutional law, Russian studies and federal and regional studies.
Gulnara R. Shaikhutdinova is Professor and Doctor of International Law in the Faculty of Law of Kazan (Volga Region) Federal University, Republic of Tatarstan, Russian Federation.