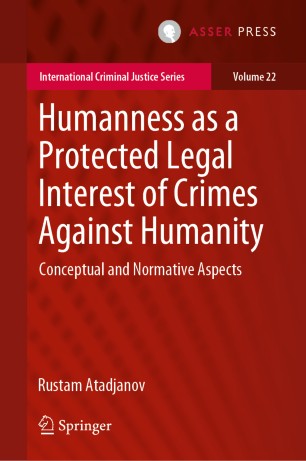 Humanness as a Protected Legal Interest of Crimes Against Humanity

The proposed theory argues that “humanity” should be understood as “humanness” and crimes against humanity should be criminalised because humanness constitutes these crimes’ valid protected interest. This volume in the International Criminal Justice Series offers an analysis of the German doctrine of Rechtsgut to justify the penalization of crimes against humanity at both domestic and international levels.

This is the first monograph on crimes against humanity written by an author from the Commonwealth of Independent States (CIS) aimed at an international audience, and should constitute a useful tool for academics, students and practitioners of international law.

Rustam Atadjanov, LLB, LLM, Dr.jur., attained his Ph.D. at the University of Hamburg in Germany and is a former Legal Adviser to the Regional Delegation of the International Committee of the Red Cross in Central Asia, Tashkent, Uzbekistan.