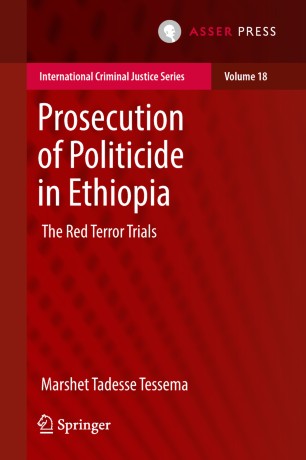 Prosecution of Politicide in Ethiopia

This book investigates the road map or the transitional justice mechanisms that the
Ethiopian government chose to confront the gross human rights violations perpetrated
under the 17 years’ rule of the Derg, the dictatorial regime that controlled state power
from 1974 to 1991. Furthermore, the author extensively examines the prosecution of
politicide or genocide against political groups in Ethiopia.
Dealing with the violent conflict, massacres, repressions and other mass atrocities of
the past is necessary, not for its own sake, but to clear the way for a new beginning.
In other words, ignoring gross human rights violations and attempting to close the
chapter on an oppressive dictatorial past by choosing to let bygones be bygones, is no
longer a viable option when starting on the road to a democratic future. For unaddressed
atrocities and a sense of injustice would not only continue to haunt a nation but
could also ignite similar conflicts in the future.
So the question is what choices are available to the newly installed government when
confronting the evils of the past. There are a wide array of transitional mechanisms
to choose from, but there is no “one size fits all” mechanism. Of all the transitional
justice mechanisms, namely truth commissions, lustration, amnesty, prosecution,
and reparation, the Ethiopian government chose prosecution as the main means for
dealing with the horrendous crimes committed by the Derg regime.
One of the formidable challenges for transitioning states in dealing with the crimes of
former regimes is an inadequate legal framework by which to criminalize and punish
egregious human rights violations. With the aim of examining whether or not Ethiopia
has confronted this challenge, the book assesses Ethiopia’s legal framework regarding
both crimes under international law and individual criminal responsibility.
This book will be of great relevance to academics and practitioners in the areas of
genocide studies, international criminal law and transitional justice. Students in the
fields of international criminal law, transitional justice and human rights will also
find relevant information on the national prosecution of politicide in particular and
the question of confronting the past in general.
Marshet Tadesse Tessema is Assistant Professor of the Law School, College of Law and
Governance at Jimma University in Ethiopia, and Postdoctoral Fellow of the South
African-German Centre, University of the Western Cape in South Africa.