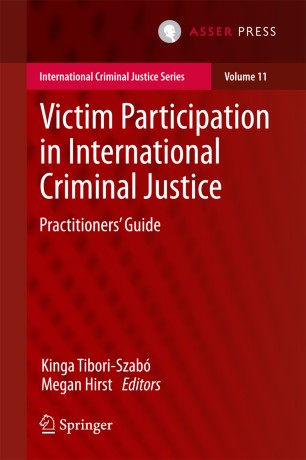 This book is a guide to the law and practice of victims’ roles before the International Criminal Court, the Extraordinary Chambers in the Courts of Cambodia and the Special Tribunal for Lebanon. The various chapters focus on the provisions relevant to victim participation at these courts and the case law interpreting and applying those provisions. The book thus informs the reader on the principal ways in which the relevant practice is developing, the distinct avenues taken in the application of similar provisions as well as the ensuing advantages and challenges.

Unlike other volumes focusing on relevant academic literature, this volume is written mainly by practitioners and is addressed to those lawyers, legal advisers and victimologists who work or wish to work in the field of victim participation in international criminal justice.

Kinga Tibori-Szabó is legal officer for the Kosovo Specialist Chambers in The Hague and has previously worked for the Legal Representative of Victims at the Special Tribunal for Lebanon.

Megan Hirst is a barrister at Doughty Street Chambers in London and has worked on victims' participation issues in the Registries of the International Criminal Court and the Special Tribunal for Lebanon, as well as in an LRV team in Prosecutor v. Dominic Ongwen.