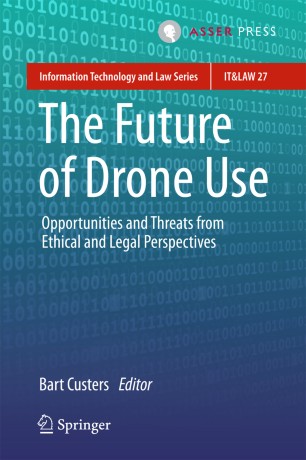 The Future of Drone Use

Opportunities and Threats from Ethical and Legal Perspectives

Given the popularity of drones and the fact that they are easy and cheap to buy, it is generally expected that the ubiquity of drones will significantly increase within the next few years. This raises questions as to what is technologically feasible (now and in the future), what is acceptable from an ethical point of view and what is allowed from a legal point of view. Drone technology is to some extent already available and to some extent still in development. The aim and scope of this book is to map the opportunities and threats associated with the use of drones and to discuss the ethical and legal issues of the use of drones.
This book provides an overview of current drone technologies and applications and of what to expect in the next few years. The question of how to regulate the use of drones in the future is addressed, by considering conditions and contents of future drone legislation and by analyzing issues surrounding privacy and safeguards that can be taken. As such, this book is valuable to scholars in several disciplines, such as law, ethics, sociology, politics and public administration, as well as to practitioners and others who may be confronted with the use of drones in their work, such as professionals working in the military, law enforcement, disaster management and infrastructure management. Individuals and businesses with a specific interest in drone use may also find in the nineteen contributions contained in this volume unexpected perspectives on this new field of research and innovation.
Bart Custers is Associate Professor and Head of Research at eLaw, the Center for Law and Digital Technologies at Leiden University, The Netherlands. He has presented his work at international conferences in the United States, China, Japan, the Middle East and throughout Europe and has published over 80 scientific, professional and popularizing publications, including three books.

Bart Custers PhD MSc LLM is associate professor and head of research at eLaw, the Center for Law and Digital Technologies at Leiden University, the Netherlands. With a background in both law and physics, his research is focused law and digital technologies. He is also the former head of the research division on Crime, Law Enforcement and Sanctions of the research center (WODC) of the Ministry of Security and Justice in the Netherlands. His research interests include discrimination and privacy issues of new technologies, particularly data mining and profiling, and technology in policing. His research in the area of criminal law is focused on technologies that may contribute to law enforcement, criminal investigation and prosecution. Examples of such technologies are Automated Number Plate Recognition (ANPR), wiretapping, fingerprints, forensic DNA research, database coupling, data mining and profiling, camera surveillance, network analyses and the use of drones.
Dr. Custers has published two books on discrimination and privacy in the context of Big Data. In 2015 he co-authored (in Dutch) a book on the use of drones. On a regular basis he gives lectures on profiling and privacy issues of new technological developments. He presented his work at international conferences in the United States, China, Japan, the Middle East and throughout Europe. He has published his work, over 80 publications, in both scientific and professional journals and newspapers.