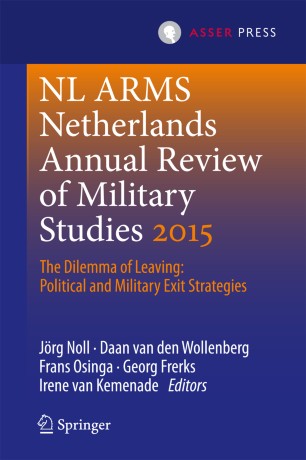 The Dilemma of Leaving: Political and Military Exit Strategies

This book seeks to bridge the gap between academic, political and military thinking concerning the success and failure of peacekeeping operations and their termination. Exit strategies have recently gained attention in political, military, academic and public debates, due to the Western engagement in international and intrastate conflicts since the end of the Cold War. Yet, many of those debates took place separately. This volume, which is predominantly a joint product of academics and the military of the Faculty of Military Sciences of the Netherlands Defence Academy, shows new venues by bridging the putative political-military divide.

Drawing on theory, empirics, and personal experiences the authors address exits at political, strategic, operational and tactical levels of current and past military missions and interventions, ranging from decolonisation wars to Afghanistan and Iraq. Although some of those conflicts are still ongoing, valid inferences can be drawn. An important one is that exit forms a problem for those who leave and for those who stay. While political and military objectives might not have been reached and many of those involved have the feeling that the job is still not yet done, the termination of the entire mission or transitions at operational level necessitate both departures and  handovers-takeovers and are thereby characterised by discontinuities and continuities at the same time. It is these dynamics between unfulfilled end states and end dates that, in the end, lead to the dilemma of leaving.

All the editors, except van den Wollenberg, are affiliated with the Faculty of Military Sciences of the Netherlands Defence Academy in Breda, the Netherlands. Jörg Noll is Associate Professor of International Conflict Studies. First Lieutenant Air-Commodore Frans Osinga is Professor of Military Operational Art and Sciences. Georg Frerks is Professor International Security Studies and Irene van Kemenade runs the Research Office of the Faculty. Daan van den Wollenberg is Commander of a mechanized artillery platoon of the Netherlands armed forces.