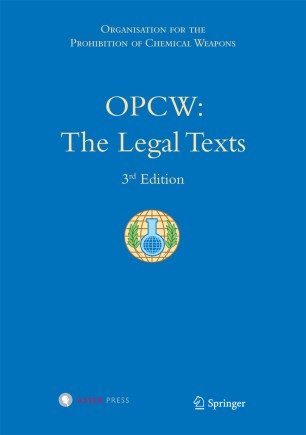 The Convention on the Prohibition of the Development, Production, Stockpiling and Use of Chemical Weapons and on Their Destruction (CWC), which entered into force on 29 April 1997, bans an entire category of weapons of mass destruction. The CWC has now been in force for almost twenty years and having 190 States Parties as at July 2014, has almost achieved universal adherence. To achieve its objectives, the CWC established the Organisation for the Prohibition of Chemical Weapons (OPCW). This third edition of 'OPCW: The Legal Texts' brings together the text of the Convention, the interpretative decisions and understandings reached by the organs of the OPCW, policies, rules of procedure, regulations, the conclusions of the three reviews undertaken by the States Parties of the operation of the Convention and key background texts. The volume provides a comprehensive overview of the Convention regime, as it has developed over the past seventeen years.

Useful for national authorities responsible for the operation of the Convention in their countries, governmental and non-governmental entities engaged in disarmament issues, legal advisers, practitioners and academics engaged either in disarmament matters, general public international law and treaty law.