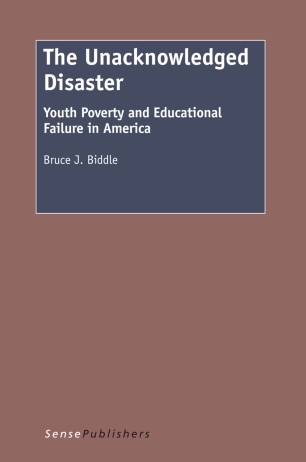 The Unacknowledged Disaster concerns two huge and closely-tied but widely ignored problems that plague the U.S. On the one hand, America tolerates a massive amount of youth poverty, while on the other, youth poverty is the major social factor generating failure in the country’s education. (More than one-fifth of American youths are now impoverished–a poverty rate far worse than those for American adults or the elderly and more than twice the size of youth poverty rates in other advanced nations–and poverty generates most educational failure effects in the U.S. often assigned to such factors as student race, broken homes, and the supposed failures of teachers and school administrators.) These problems have been studied extensively, and the tragedies they create are well known to scholars, but they are often misrepresented, misunderstood, or unacknowledged by far-right advocates, media figures, policy makers, and those concerned with serious problems that now beset the United States. This book reviews evidence concerning these problems and their dire effects, discusses ineffective or tragic outcomes that result when these problems are ignored, assesses why these problems are so often unacknowledged in the United States, and sets forth clear, evidence-based policies that can reduce the disastrous scope of American youth poverty and its destructive effects in education.